Touché— From the Vault

Signs of the Times, the militant journal E. Haldeman-Julius refers to in this barb concerning the relative unsophistication of a certain religious argument of the early 20th century—and shows the vulnerability to criticism of caricaturing ideas in cartoons— is a journal first published by (or for) the Seventh-day Adventist Church in 1874 and is still published today. Haldeman-Julius and his wife began publishing, under several names, what eventually came to be called the Little Blue Books, small pamphlets that covered topics from literature to freethought, from socialism to science, and sold in the millions of copies by the late 1920’s.

Below is an excerpt from The Militant Agnostic, written by Haldeman-Julius in 1926 and published in 1995. 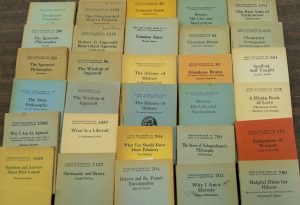 “a cargo of the devil’s library”

In Christian circles, evolution is the new bogey-man, the ogre who is going to eat the dear little children—that is to say, eat their souls and deliver them into the dark dungeons of soulless science. For example a lurid frontispiece in Signs of the Times, a militant religious journal, shows the innocent children entering a school yard, tripping gaily hand in hand, with their school books (containing God knows what wickedness of knowledge!) slung over their shoulders; and at the gate stands a huge, sinister ape, labeled across his hairy chest “Evolution,” with a cargo from the devil’s library hanging over his shoulder. This ape is intending to destroy (spiritually of course) the children and the human race. It is the duty of Christians to protect the children and the race from this monster. The cartoon is a little inaccurate, however; for the ape, if we regard him as a real ape, is not going to teach the children anything; he is as innocent of knowledge as many Christians.