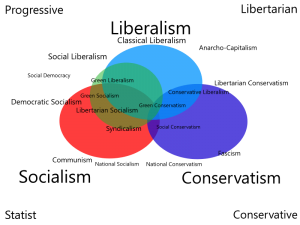 The politics of the United States has always been on unstable and shifting grounds because this instability is heavily influenced by societal changes depending on the era. Political centrism started declining in the late 1970s when conservatism was redefining itself as a core identity within the American politics to resist  the escalating influence of socialism by the Soviets. This turning point debunks the standard rule that societies evolve in a linear direction, and the ideas that are politically and culturally progressive are the end result of such evolution. History refutes this misconception about the socio-political course in the United States.

From the 1930’s till the 1960’s, an era that witnessed the birth of the civil rights movement, the political spectrum of the United States was either centrist or left leaning. During that era, the Democrats re-established their ideology as the “party of the progressives” and endorsed integration after  decades advocating segregation. The ‘Grand Old Party’ simultaneously was shifting its doctrine for its audience who had experienced prosperity and started accumulating wealth, which has led to the birth of the middle class. This societal evolution was significant because it changed forever the political platform for both parties. The Republicans started increasingly reversing their policies they once applied fearing from a socialist revolution in America and established nationalism, nativism and economic freedom as the main pillars of American freedom. The GOP leadership began adopting populist conservatism that led in the 1980s to the landslide victory of Ronald Reagan. 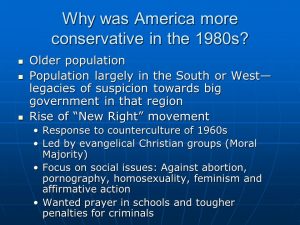 Contemporary conservatism was thus reborn following 6 decades of a left-leaning governance in the United States. Populist conservatism is currently challenging the hierarchical direction the previous  centrist liberal establishment. Let’s not forget that the legacy of progressive leadership that paved the way for the civil rights movement is still being challenged. As an example, the previous Vice President Dick Cheney voted against the Martin Luther King Jr. Birthday Memorial before voting for it several years later. The Supreme Court landmark in 1973 that criminalized restrictions on abortion is slowly losing influence,  and four states, including Louisiana, have “trigger laws” in place to ban abortion entirely in the event the Supreme Court overturns Roe v. Wade. Currently 7 states have one remaining abortion clinic and other states have imposed regulatory laws that made it impossible for operating clinics to remain open. As a result, Iowa closed 11 clinics in the past 8 years and in 2013 severe laws imposed by GOP legislators made abortion illegal by any practical standard.  Doctors can refuse to provide abortion to women after they hear heartbeats for an embryo at 6 weeks, which is the timeframe when women became aware of their pregnancy. Louisiana closed 4 out of the 7 clinics available.

The cultural clash over abortion doesn’t seem to end anytime soon. This comes in a time where more women are enrolled in colleges and workforce than ever before; the radical laws from conservative leadership is becoming increasingly dysfunctional.

Conservatives who adopted the populist approach are now mainstreaming criticism of “political correctness” and are increasingly attacking terms like “pluralism,”  “diversity,” “inclusion,” “feminism,” etc.—in a disguised attempt to defend the “moral foundations” of American society. Within the span of a generation, the United States ended segregation and reformed the Immigration and Nationality Act to end giving  Europeans the exclusive privilege in immigrating to America. The new reality impacted Americans on the right and left of the political aisle. Democrats become more incremental for this irreversible change and initiated a strategic platform for defining America in the twenty-first century, whereas Republicans’ resistance to this change made their political platform only open to the generation of baby boomers and conservative leadership that  glorifies a past which no longer exists.

The big question is whether Republicans and the conservatives are able to break free from their ongoing futile resistance that has caused an unprecedented political polarization in the country.  Let us not forget the results of the midterm elections in November of last year. The Democrats reclaimed the house for the first time since 2010 and won the popular vote by 10 million. The Senate elections resulted in no change in the balance of power,  but a bigger margin in the popular vote for the favour of the Democrats. Despite losing 4 incumbent races, Chuck Schumer won 53 million votes while Mitch McConnell won roughly 35 million.

The widening gap between the American’s political interests and their leadership proves how the current political system is incapable of dealing with a society that will soon no longer have a majority but several minorities with a diversity of interests. The leniency of the progressives in the 21st century created a gap that  has impacted America’s silent religious groups which have galvanized their base since the 1980s.  Radicalization of the American public started with the boom of communication technology that is accessible now to every individual. The access of information made it far easier for churches to infiltrate households and begin challenging the secular values of the society on issues related to global threats like climate change.  The public opinion has dramatically shifted from being overwhelmingly supportive to highly suspicious about the authenticity of climate crisis. This was due to the unprecedented influence from corporations and big profit companies that benefited from Citizens United, by funding campaigns to politicians who systematically engineered their messages to their constituents by creating alternative facts and supporting conspiracy theories.

History proved that progressivism has always eventually won over reactionary conservatism despite the drawbacks it faced adjusting to changes. While progressive Democrats were no longer the exclusive political pillar for the white working class, but a group that has shifted towards the Republican haven. A new age of conservatives who defined themselves as an interest  group that opposes further change will ultimately dismantle their own  legacy and is no longer a viable option.Progressives are reshaping the Democratic Party and are calling to re-secularize the United States whereas the GOP seems to be only winning in a shrinking group that will soon lose all channels of influence. 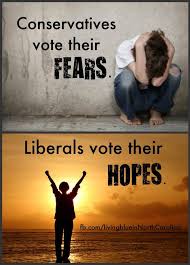