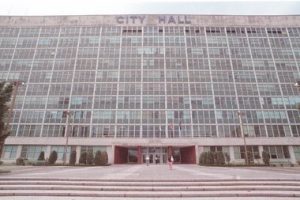 Until a few months ago, NOSHA’ s relations with the public officials at City Hall have been cordial, if not completely chummy with everyone. A good example of this is President Emeritus Harry Greenberger gave secular invocations to begin city council meetings on eight occasions, which began sometime between 2001 and 2003—the last in 2015. A recent action in October by the new administration, however, led by Mayor Latoya Cantrell brought to the attention of  NOSHA member Glenn Pearl the need for a little secular restraint on what had the earmarks of religion creep, scaling the wall put in place to keep churchy stuff off public property and out of government buildings, and may have created a fresh stress point in the relationship. The action was the establishment of a so-called “Meditation Room,” a safe and quiet place for troubled youth (primarily) to take a deep breath, reflect, receive some words of counseling, and maybe even—on certain days—have an acupuncture treatment. The counseling proposed  was to come from none from the city’s own paid professional social workers; but the program and room was established to hook up troubled youth with the “tons of  resources, community-based organizations offering these  services,” said Emily Wolff, director of the Office of Youth and Families.The “tons of resources” turned out to be a congregation of 12 or so ministers, priests, and other men of interfaith denominations, with the goal of having about 40 similar volunteers, “one for every day of the month.”

Pearl filed the following complaint with the Freedom From Religion Foundation (FFRF) and Americans United for Separation of Church and State:

“I am a member of the Board of Directors of the New Orleans Secular Humanist Association (NOSHA).  We have recently become concerned that a new city program announced by New Orleans Mayor LaToya Cantrell, at least in part, is a violation of the Establishment Clause of the First Amendment of the Constitution.

On October 25, 2018, Mayor Cantrell, Health Department Director Dr. Jennifer Avegno, Office of Youth and Families Director Emily Wolff, and two local pastors, held a press conference to open the City’s new “Meditation Room” at City Hall.  In what appears to be the main arm of the initiative, citizens in need of counseling are encouraged to come to the Meditation Room and meet with one of up to 40 “faith-based community leaders”.

We have read the FAQ, and clearly, this situation does not fit in the standard and more common violation scenarios.   However, we strongly feel this is a violation in that the city is providing city-owned office space for nothing other than religious “counseling”, as well as providing free advertising and a steady stream of referrals and possibly new congregants to those “faith-based leaders.”

We have not pressed the Mayor’s Office or the Office of Youth and Families for more information because we are uncertain what exactly to ask.   Therefore, we have decided to turn the information over to FFRF and Americans United for Separation of Church and State and let the expert in these matters help us in determining whether there is a violation here, and how to go about ending it.

If possible, NOSHA would like to be involved in any actions, announcements, or press releases regarding this matter.

Contact information for the Mayor and Emily Wolff is below, along with links the press conference video and local news articles. [Followed by physical and email addresses of Mayor Cantrell and Director of the Office of Youth, Emily Wolff]

AU requested more information on the case, but FFRF promptly sent the city a records request concerning the team of counseling clergy. The response from the city? There is no record; and—if it is to be believed—only one preacher held court there, and then for only about 10 days.The response from FFRF’s legal counsel (along with a commitment to review any forthcoming new information):

We’ve received a response from the New Orleans City Attorney’s Office to the February 15, 2019 open records request we sent regarding the meditation room inside City Hall and the city’s associated faith-based volunteer policy.

According to the response, there are no records regarding policies for clergy to staff the meditation room and that “the only person who has staffed the Meditation Room is Father John Asare-Dankwah of St. Peter Claver (from 10 a.m. to 2 p.m. October 29th to November 9th).”  For this reason, we are satisfied that the meditation room is not being used regularly to promote religion. If you discover new evidence that suggests otherwise, we are happy to review that information and potentially contact the Mayor’s Office again.

If you have any further questions or concerns, please let me know.

Thank you for reporting this issue to us and for your interest in protecting the Constitution.  Most of all, thank you for supporting FFRF. We could not do our important work without your generosity.  If you’d like to lend additional support, please click here.

We encourage you to report any future state/church complaints to FFRF here.

So…the case—as far as FFRF is concerned—is closed, at least for the time being. Perhaps a spot check by anyone in the neighborhood of Loyola Avenue and Duncan Plaza during business hours would be a good thing. If the city’s claim is accurate, and there are no volunteer clergymen making regular appearances for counseling, someone needs to ask: Was this another exercise by well-intentioned government representatives over-relying on the magical appeal of New Age woo to solve or mitigate deep-seated complex social and behavioral problems? And maybe the addition of some old time religion was a sure-fire selling feature to which no devout New Orleanian could disapprove?

And just how many acupuncture treatments have been administered, anyway?

The healing power of Humor

Many thanks to Glenn for recognizing this probable church and state separation issue and following up with correspondence to FFRF and AU. His is an example of good secular citizenship from which we all can learn something.