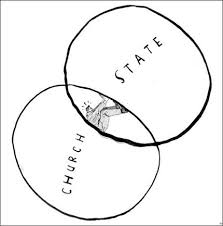 I have Secularist’s Anxiety (SA). It is not a medical or psychological condition, but one I made up to explain an effect a trend of national events that are possible forebodings of difficult times ahead for we who are serious about living and teaching secularism. Maybe I should call it secular jitters. Much of what I relate to in this opinion piece is probably familiar to all readers here, and quite recently published. But I believe listing these events together may be eye-opening. And, I would think, most readers here are also experiencing some degree of SA—the jitters.

The condition would figure to be inevitable.  Six decades of continual baby-step progress— punctuated with occasional game-changing  secular court decisions taking precedent over Biblical legal interpretations—sixty years would be enough time to expect the religious object in the rearview mirror to vanish into the folklore of the past. From banning teaching religion in public schools, to Roe v. Wade, to matrimonial rights for same sex couples—the forces of theocracy seemed to be in decline. But all of that has changed in the past few years. Fundamentalist politics wasn’t on the run, it was re-grouping. We now see the political and legal conditions have changed in decisions of religion v. secular and liberal rights and protections, and no where is it so visible as the federal government.

The current administration won its job courting the religious right, and it paid off. Coalitions of conservatives and evangelicals had been forming, splitting, and re-emerging since the Nixon Southern Strategy (which would later encompass areas outside of the Deep South.) Now, judges sympathetic to the conservative cause are being placed in the high courts. Legislators in State Houses and the United States Congress have swollen with increasingly less moderate representatives. The United States  Attorney General Robert Barr speaks of a return to religious morality and tradition. The U. S. Department of State website displays a banner photo of Secretary of State Pompeo addressing the Association of Christian Counselors, along with the complete text of his talk, front and center.The Secretary’s sincerity oozes from his unassuming, almost boyish countenance. (*)The Do No Harm Act languishes in the House of Representatives after being reintroduced because it failed to advance upon its initial introduction in 2017. This bill would mitigate the abuse of the Religious Freedom Restorationm Act  from “bad faith interpretations which have been used to deny health care coverage for employees, claim exemptions to civil rights laws and impede justice in child labor and abuse cases,” said Representative Bobby Scott, D-Va, who co-introduced the bill (1). Louisiana’s own strict abortion requirement concernning admitting privileges for providers is getting a hearing at the Supreme Court, and becomes the first review of Roe v. Wade with the new conservative majority on that bench, and services for women’s reproductive health could be further restricted for uninsured and underprivileged citizens.

All of these recent events are enough for concern for any involved secularist; but another ongoing process aggravates the stress. There is a very good possibility that our national political and legal structure will be met with a “Constitutional crisis” in the very near future as the impeachment proceedings against the president (and likely other members of his administration and cabinet) increase. There is no guarantee that the Constitution will survive it.  It is the oldest in the world and some scholars believe may be in need of an overhaul, or scrapping altogether. (Thomas Jefferson even suggested it needed to be rewritten every 19 years.) In the face of the possibility of a theocracy though, it should be evident that we do need a code of law and within it a list similar to the current Bill of Rights including a reaffirmation of the value of the separation of the government from religion.

The odds that a new national law will come out of a Constitutional crisis arising  out of impeachment hearings are slight, but a suspension of parts or all of the current Constitution, if only temporary, is not quite as far-fetched to imagine. As unstable and compulsive as Trump is—especially when issues involve his ego, and the stress of over two years of Mueller investigations and impeachment may have become overwhelming —we cannot assume something like this is an impossibility. To be openly secular and to criticize religious intrusion into public life will become more difficult, because such views require the guarantees of the First Amendment. Protestant Evangelicals will have none of our message, we will be public enemy #1.

Jittery, anxious times. Keeping these nightmarish visions within the domain of nightly sleep hours instead  of allowing them to see the reality of day is imperative. Stay calm; and don’t forget your principles or reason.

Marty Bankson reporting from the The Humanist Advocate

(*)Since this was originally published, televangelist/prosperity gospel huckster-grifter Paula White has ben retained by the White House for her “services.”