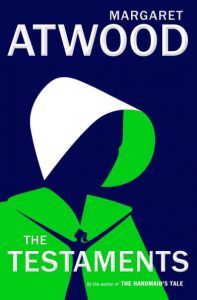 Margaret Atwood’s latest (September 2019) novel is The Testaments, a sequel to her bestseller, The Handmaid’s Tale. Both stories are told from the perspectives of women living in Gilead, a women-oppressing theocracy that overtakes the United States by revolution, then becomes mired in the many difficulties that inevitably arise when religious institutions have worldly power.

The Testaments gives us three very different first-person perspectives on the beginning of the end of Gilead. One narrator is a young woman who grew up in Gilead, another a young woman who was spirited out of Gilead as an infant. The third narrator is a mature woman who grew up in the United States, resents finding herself in Gilead, yet somehow finds a way not only to survive in it but to achieve real power. There is a lot of psychology in The Testaments, a lot about motivations and the ways our environments shape what we think and feel, about how having no way to win can be the same as having nothing to lose.

The Testaments assumes the reader is familiar with the action of its predecessor, and might not make much sense without that. Fans of A Handmaid’s Tale, however, will find The Testaments worthy of their time.