“A Pair of Spurs and a Fig-Leaf is Aplenty”

The editors of The Bible According to Mark Twain suggest that this is the last “substantial” piece of work written by Clemens. The manuscript with the advice on etiquette was given to his biographer, Albert Bigelow Paine, when Paine arrived in Bermuda in 1910, where he had come to assist Clemens return home to Connecticut because Clemens was suffering from angina pectoris: chest pains likely the result of coronary heart disease, and the probable cause of his death one week after his return .

In fewer than 1000 words, it swings from hilarious common-sense and bawdy banter (“avoid over-dressing. A pair of spurs and a fig-leaf is a plenty”), to the dark cynical imagery of the mother observing from her perch in heaven her unbaptised child beckoning with outstretched arms to save her from “roasting in red fires.” It  remains as an important expression on the folly of (Christian) religion that fascinated him and recurred often in his writing, but one that is not likely to be found in many anthologies of his work.

ETIQUETTE FOR THE AFTERLIFE  (ADVICE FOR PAINE)

In hell it is not good form to refer, even unostentatiously, to your relatives in heaven, if persons are present who have none there.

Upon arrival in heaven do not speak to St. Peter until spoken to. It is not your place to begin.

Do not begin any remark with “Say.” It is vulgar. Call him “Hochwhwohlgeborene.” (1)  To start with. After that , say “sir.”

Wait patiently in the queue till it comes your turn to apply for a ticket Do not look bored, and don’t scratch your shin with your other foot.

When applying for a ticket, avoid trying to make conversation. St. Peter is hard-worked and has no tjme for conversation. If you must talk, let the weather alone. St. Peter cares not a damn for the weather. And don’t ask him what time the 4:30 train goes; there aren’t any trains in heaven except the through-trains for the other place, and the less information you get about them, the better for you.

Don’t tell him you used to have an uncle named after him, “maybe you have met him.” He is tired of that.

You can ask him for his autograph–there is no harm in that–but be careful and don’t remark that it is one of the penalties of greatness. He has heard that before.

Do not try to show off. St. Peter dislikes it. The simpler you are dressed, the better it will please him. He cannot abide showy costumes. Above all things,  avoid over-dressing. A pair of spurs and a fig-leaf is a plenty.

Do not try to Kodak him. Hell is full of people who have made that mistake.

If you get in–If you get in–don’t tip him. That is, publicly.  Don’t hand it to him, just leave a quarter on the bench by him, and let on you forgot it. If he bites it to see if it is good, you are not to seem to notice it.

Keep off the grass.

Always observe the forms of etiquette. Whenever you meet the redeemed, pay no heed unless they salute; but always when you meet angels, uncover and make a bow.

If you get seasick and feel you must go and lean over the bulwarks, don’t do it, for those poor damned people down below have enough to bear without that.

When you meet a friend, don’t volunteer to call on the rest of the family; it could be embarrassing. Just wait. If the man forgets to invite you, or casually remarks that the family are off on vacation, drop the matter right there, don’t say a word. You can rely upon it the family are where they don’t need any snowshoes.

Be always kind, always forgiving–let bygones be bygones. Send the Lyon-Ashcrofts a fan. (2)

Sunday afternoons, when you go with the rest of the redeemed to leans over the balusters and the the little unbaptised Presbyterian and Roman Catholic children roasting in red fires, don’t crowd ; remember, others want to see, as well as you. And you must rub your hands together, and laugh a little, and let on to enjoy it; otherwise people will suspect you are not as good a Christian as you look, and you will get talked about, and perhaps avoided. If a mother wants to look down and see her child, give her your place. When she remembers how she use to hug that little creature to her breast  and smother it with kisses, she will have a great pain at her heart; and if it recognizes her and joyfully puts up its hands to her believing she will fly to its help, caring nothing for the flames of hell and all the devils if she can but rescue it, lay your hands quickly upon her or she will throw herself over the baluster to join her child; and once in hell she can get back to heaven no more. In fact will not want to get back among any such human refuse.

You will be wanting to slip down at night and smuggle water to those poor little chaps, but don’t you try it. You would be caught, and nobody in heaven would respect you after that.

Play no jokes–it isn’t the place for humor. Once a joker surreptitiously placed this legend over the pearly gate:  “Who enters here leaves his heart behind: but it doesn’t matter, he won’t have any use for it in this place.” Ah, where is that joker now? Look over the balusters and you will see.

Be very careful about etiquette when invited to dinner. For evening dress, leave off your spurs.

Angels are in a class by themselves, and much higher than you. Do not try to look like an angel; it will not deceive.

By and by, if you behave, they will give you a halo. The most of them are flimsy and will not wear; but if you are good you will get one with a rubber tire.

The Bible According to Mark Twain  Irreverent Writings of Eden, Heaven, and The Flood. Edited by Howard G. Baetzhold and Joseph B. McCullough.  Touchstone, New York, 1996.

(2) Isabel Lyon, the personal secretary of Clemens, and Ralph Ashcroft, his business manager who were accused by Clemens’ daughter Clara of “mismanaging her father’s affairs and embezzling his money.

(3)Helen Allen, daughter of William Allen, United States vice-counsel to Bermuda; and one of the “Angel-fish” in Mark Twains “Aquarium Club.” 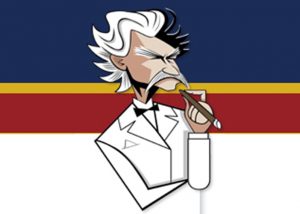