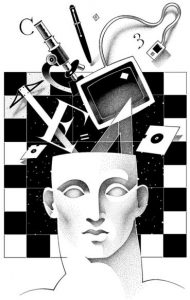 The St. Charles Parish Library in Luling, Louisiana, just upriver from New Orleans, has something unique: a planetarium. The planetarium is a 42-seat theater that projects images of our solar system and points beyond in a digital dome above and around the seating. The Director of the project is Jason Talley, also known as “The Planetarium Guy,” gave the presentation for the second Science Café presentation at the very un-planetarium-like Neutral Ground Coffeehouse on Danneel Street.

Jason’s resume of over ten years of “informal, science education experience” was evident with the upbeat and informed presentation “14 Billion Years Since the Big Bang”that about 30 people had come to hear. The basics of cosmology, the Big Bang theory, the age and the expansion of the Universe were explained in lay terms and with demonstrations using a stactic-y radio and a balloon for props.

NOSHA member Jenny Lola Smith was there with her daughter Minka and her friend Alice, whom Jenny described giving the typical 11-12 year-old response: “That was SO cool!” and “I remember that from Cosmos, but it never gets old hearing about it!” Asked which of the demonstrations impressed them the most, Minka said she liked the radio with the static, which is, in part, the reception of radiation left over from the Big Bang.

She also liked the illustration of the expansion of the universe with galaxies marked on the outside of a deflated balloon expanding farther apart as the balloon was filled up. Her companion Alice liked the PowerPoint illustration about the oldest light in the Universe and how we can measure the time and distance by the spectrum of visible light waves.

By any measure, this second Science Cafe was a success if it did no more than inspire these two bright and inquisitive minds.

Talley is the Director of the St. Charles Parish Library Planetarium. With over ten years of informal, science education experience, he has lectured on a wide range of space and earth science topics to audiences of all ages.

He has served in various informal educator programs such as NASA’s Solar System Ambassadors and Earth Ambassadors. Talley believes we gain a better understanding of ourselves through learning about our cosmos and looking to the stars.
~ Marty Bankson