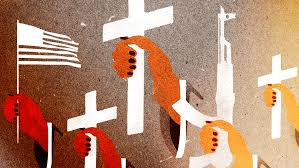 To get the most recent and  thorough understanding of this thing we call white Christian nationalism, The Flag and the Cross: White Christian Nationalism and the Threat to America, published in April this year should be just such a book, especially if you are interested in a smattering of academic sociology research surveys used to inform a deeper dive into the mindset of citizens participating in the surveys. Over a dozen graphed surveys using their “christian nationalist scale” are documented  by the authors Phillip S. Gorski, a  comparative historical sociologist and Professor of Sociology at Yale U., and Samuel L. Perry, an Associate Professor of Sociology at the University of Oklahoma and a sociologist of American religion, race, politics, sexuality, and families. Packed into a mere 130 pages, the information density of the book is high, with the analysis of these plotted “binary regression models,” and tempered with a wealth of themes from political philosophy, many illustrated by current events. So high, in fact, that I found myself highlighting and bookmarking passages and pages at more than twice the frequency I am used to, any and all things “not to be missed, or forgotten,”  but unfortunately too numerous to get mentioned in this review, so I hope to convey the most important takeaways that I found that need sharing.

So what is  white Christian nationalism? The authors borrow a term from Arlie Russel Hochshild’s Strangers in Their Own Land—”deep story.”

“White Christian nationalism’s “deep story” goes something like this: America was founded as a Christian nation by (white) men who were “traditional” Christians, who based the nation’s founding documents on “Christian principles.” The United States is blessed by God, which is why it has been so successful; and the nation has a special role to play in God’s plan for humanity. But these blessings are threatened by cultural degradation from “un-American” influences both inside and outside our borders. Like any story, this one has its heroes: white conservative Christians, usually native-born men. It also has its villains: racial, religious, and cultural outsiders. The plot revolves around conflicts between the noble and worthy “us,” the rightful heirs of wealth and power, and the undeserving “them” who conspire to take what is ours. Sometimes, the conflicts culminate in violence—violence that restores white Christians to what they believe is their rightful place atop America’s racial and religious hierarchy. The heroes are those who defend the purity—and property—of the white Christian nation: with violence, when necessary.”

But this is pure myth, say the authors, given the diverse religions of deism and others present in the foundational era of the country, using  political ideas from The Enlightenment’s classical liberalism and civic republicanism borrowed from Athenian democracy, and, with the understated fact that “More than a little of the nation’s wealth and prosperity were derived from stolen land and slave labor.” And the authors point out that it is not just a matter of what it is, but also of what it should be: a Christian nation, “or at least a nation run by Christians.”

And why “White”? The myth was begun, built, and amended by first the original Anglo colonists (“we were here first”), and subsequent (mainly Protestant) theologians and other cultural factors; and like many myths has a Manichean theme of good versus evil, complete with heroes—themselves,  and villains—beginning with their combative cohabitants Native Americans and Black slaves. The list of villains evolves, as does that of who would be in the heroes column. “Secular” Christian nationalism may seem to be a contradiction in terms, but it is part of that evolution. Many that identify  with the concepts of the overarching movement are not particularly “religious” in practice. 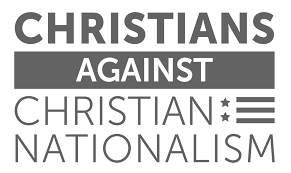 Gorski and Perry surmise the movement might better be labeled an “ethno-traditionalist” political movement rather than a predominantly Christian one. Andrew Seidel, in his debut study The Founding Myth: Why Christian Nationalism is Un-American refers to another of Perry’s studies that concludes “the single most accurate predictor of whether a person voted for Donald Trump in the 2016 election was not religion, wealth, education, or even political party: it was believing the United States is and should be a Christian nation.” Gorski and Perry ask “Why would someone strongly affirm that the government should ‘advocate Christian values’ and yet support the use of torture or oppose gun regulations?…..and many of them don’t have an obvious connection to Christianity at all: There is no Commandment saying, “Thou shalt not wear a mask”. Identifying with white Christian nationalism is an especially effective political ploy to would-be aspirants to elected office in many regions of the country. You would think Donald Trump has run the batteries dead on this gadget politics by now, but the problem is, he hasn’t, and the remaining wattage available from it is being used by an increasing number politicians and would-be demagogues becoming actors in what now seems to be a self-fulfilling prophecy inherited from the nascent days of our republic. But some key metrics remain consistent through the years (and now centuries): racism, the struggle of good v. evil, persecution, hierarchy, patriarchy, redemptive and restorative violence, aversion to liberal democracy, messianism (the most recent savior, of course, being Trump),  and a quirky libertarianism.

The book addresses four basic questions outlined by the authors: What is white Christian nationalism, When did it emerge?  How does it work politically? and Where might it be headed tomorrow? They call it a “primer,” and based on its brevity, I guess you could call it that. But 130 pages of text followed by over 30 pages of notes, acknowledgements, and a comprehensive  index makes it a sourcebook that should serve any reader a wealth of ideas and references for some time. Or at least until it is banned, if a white Christian nation becomes a reality, which seems to become more of a possibility with each passing day’s news. The authors do give some answers as to minimizing these threats, and list some built-in Constitutional structures and laws of the Republic that would make it difficult to achieve, but…..