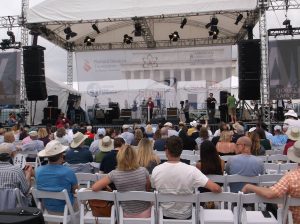 Four years ago, Reason Rally 2012 was promoted as the “largest secular event in world history,” a Woodstock for atheists and skeptics. Organized and produced by David Silverman, President of American Atheists, Inc., it was a momentous coming out party for 30,000 nonbelievers on the Mall in Washington, D.C. A long lineup of speakers from the scientific and entertainment fields were the main event.

Reason Rally 2016, held last month again in Washington, “had a greater variety of activities over the weekend, which reflects the happy fact that the secular movement has progressed beyond the need to merely show we exist,” said Beth Deitch, one of several NOSHA members from New Orleans who went. “The number of groups was so much larger than four years before. So many demographics and perspectives were represented.” 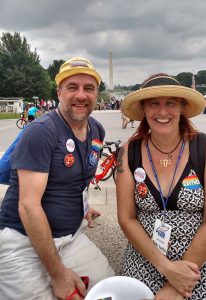 To be sure, over 30 groups were represented—from FFRF to Secular Media Network to Mythicists Milwaukee to Lady Parts Justice—almost all of them tabling in tents set up along the outer edge of the mall. The organizers set a decidedly more political slant to the speaking subjects and activities this year, probably in part due to it being an election year, and partly because so much legislative wrangling and a plethora of court opinions have been handed down over the last year. LGBTQ and other social justice issues were a recurring theme.

“The Reason Rally is absolutely a political event,” said executive director Lyz Liddell. “That’s the reason we’re holding this in an election year. We want to see reason taking precedence over religious-driven ideology.”

Traveling with Deitch was fellow NOSHA board member, William Gautreaux. NOSHA member John and Donna Williams and John’s sister, Darlene Reaves were in the crowd while also visiting their daughter during their trip to the city. Douglas and Yvette Parfait of Slidell came, said Doug, with one purpose: “I didn’t go this time to listen to speakers, and I didn’t. Not one. I went to mingle, to find as many people I’ve only known on Facebook as I could.” Taking pictures was another thing he managed to do, and do quite well—thanks to him for the photos included in this story.

THE VENUE. THE CROWD. A noticeably lower turnout from the 2012 event has been the topic of discussion for just about everyone associated with the event. Hemant Mehta, The Friendly Atheist blogger, came up with several reasons for the low turnout, including: the late cancellation of Johnny Depp and Richard Dawkins; the novelty had worn off; it took place in the summer; etc., etc. A few observations, estimates, and a few explanations by our NOLA contingent:

Douglas P.  – “In 2012, the number was 30K-ish, I haven’t heard of any official estimate for 2016, however I would say 4K (but that’s just my estimation). The white chairs in front of the stage were VIP seating, and those chairs were never filled, sparse as well. I found that a little embarrassing.”

Beth D.  – “I do think the physical layout of the event made the crowd look somewhat smaller than it actually was. The stage was in front of the Lincoln Memorial, with the space in front of the stage taken up by the VIP seating. We had VIP seats, which was nice, for sure, but it kept the bulk of the crowd from being close to the stage — behind the chairs was the reflecting pool, so the crowd had to be split off on either side of the pool were still around 10,000 atheists gathered in one place for RR2016, which was exhilarating! I believe that growth may have contributed to the lower attendance in 2016 than in 2012: There are now atheist conventions and events and communities all over the country, all throughout the year….”

John W. – “I haven’t seen an official after-the-fact estimate of the turnout, but I’m guessing it didn’t reach the 30+K that was projected. [George] Whitfield was routinely delivering numbers like this throughout the colonies over 270 years ago, during the Great Awakening [the original American religious revival event], before there were planes or cars. So, for me the turnout was disappointing…We sat under a tree, in the shade, near the spot where, in the movie, Jenny spilled into the Reflecting Pool yelling for Forrest [Gump]. A few ducks with ducklings swam in the green water of the pond, shoveling algae up with their bills like a BP oil skimmer. A large egret flew overhead several times, and on each occasion was promptly mobbed by two crows. One of us sat in doggy doo. My impression is that D.C. is behind the times when it comes to curbing your dog. We even ran across it on our way out, in the airport, on the terminal floor.” 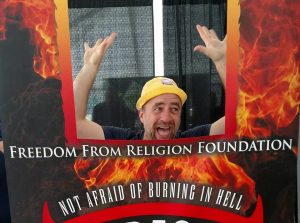 OBSERVATIONS IN THE PSEUDO-TRANSGENDER BATHROOMS. Public restrooms: almost every anti-theocrat and social justice advocate’s favorite issue this spring; and the management at the hotel where (ironically) the comedy program was presented was happy to accommodate; transforming, with a quick paper-over, the usually gender-specific WCs into New Age community toities.

Beth D. – “Friday night we went to a Reason Rally comedy show, which was so much fun! The emcee for the show was David Smalley, who is the host of the Dogma Debate radio show/podcast, and founder/president of the Secular Media Group. He has been a strong ally for trans people in this ridiculous focus on their right to pee in peace. So I was not at all surprised to find that the signs for the restrooms at the show venue had been covered with new paper signs reading “gender-neutral restroom.” And guess what? Not one person fainted away, or was overcome with a sudden desire to sexually assault someone! However, one of the comedians did comment on one behavioral change he noticed: with women being around, ALL of the men were actually washing their hands! William leaned over to me and said ‘yeah, that’s not usually the case.’”

John W. – “We all attended the Friday night comedy show. The comics were Leighann Lord, Ian Harris, and Keith Jensen, and they were all very funny, as good as any New York comedy show I’ve been to. After the comedy show, off of the hotel’s lobby, I used my first gender-neutral public toilet. I’m not sure it was sanctioned by the hotel. There were several women waiting for stalls in the bathroom; and I’ve never seen men belly-up so close to the urinals, which is actually a good thing. The guys also all washed their hands when they left, just like one of the comics had just joked about. There is a lot of truth in good comedy.”

ON THE PROSELYTIZERS. No gathering of heretics, secular activists, or misguided souls debauching on Bourbon Street escapes their notice and compulsion to share God’s word. No one expected a reversal of this trend at the Reason Rally. 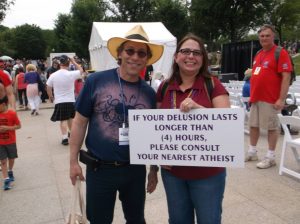 Beth D. – “There were a few bothersome protesters and proselytizers about, but the occasional individual ranter was easy to ignore, and any protesting groups were small and on the periphery. (I know Ray Comfort had wished to bring a large contingent of harassers, but was informed that any sizable protest would require a permit and a designated location).”

William G. – “The Christian protesters were not allowed to organize within our rally to harass us, but they were sometimes alone or in groups of two or three within the rally proselytizing. Of course, we completely ignored them.

However, there was one guy handing out little cards with the HRC (Human Rights Campaign), symbol on them. It has a dark blue background with a yellow equal sign. Since I was a volunteer with HRC for 10 years, I wanted to support them, so Beth and I each took a card. We flipped the card over, and there were Bible verses denouncing gay people. We went to give the cards back to the guy and told him that this was dishonest and intentionally deceptive. I asked him why Christians needed to use lies and deception to get people to listen to their message. He did not have an answer. It’s just like when Christians go into schools and bribe kids with pizza and other kinds of treats in exchange for listening to the Christian message.”

John W. – “…A little further down, at 17th and Constitution, my sister and I ran into an aggressive preacher with a bullhorn. I promised myself that I wouldn’t engage him, but again, like many times before,I did anyway. In an amplified voice he told us that we were going to live in Hell for eternity. We said we would be amongst friends and started dancing like it was Mardi Gras. With this he became unhinged. As we danced away the bullhorn quoted bible verses and called us fools. We were fools for reason.”

Many thanks to everyone who contributed by sharing your observations, thoughts, and photos; and your permission to edit them as needed.