BOOK REVIEW: Who Were the Early Israelites and Where Did They Come From? 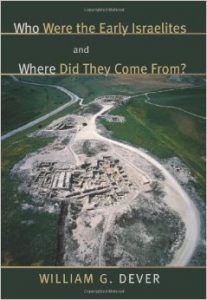 In Who Were the Early Israelites and Where Did They Come From?, archaeologist William Dever grapples with the disconnect between biblical texts and the material remains of the ancient cultures of Canaan. Dever’s perspective is scholarly, based on a knowledge both of the contents of Hebrew scripture — what Christians call the Old Testament — and of what digging in the dirt can still turn up from biblical times.
Dever’s book focuses mainly on the origins of the Israelites, the Children of Israel who, according to the Bible, were enslaved in Egypt, escaped by divine intervention, and conquered the lands of the Canaanites in and around what we would call Israel today. Biblical lore emphasizes the distinctness of the Israelites, separating them ethnically and religiously from the peoples of both Egypt and Canaan. Scholars have long realized that the lines of descent must be much blurrier than the Bible seems to say. The Hebrew language is close kin of the languages of Canaan, and contact between Canaanites and Egyptians was frequent and prolonged.

Experts disagree with one another on many details, yet there is a mainstream consensus about the broad strokes. Dever’s opinions fall well within that consensus. The book of Exodus, describing the escape of the Israelites from slavery in Egypt, and the book of Joshua, describing the Israelite conquest of the land of Canaan, are literature, not history. The plagues inflicted upon the Egyptians were meant to emphasize the miraculous, and attempts to find scientific explanations for them are a waste of time. The desert ecology of the Sinai peninsula, in which over a million Israelites supposedly wandered for 40 years, simply could not have sustained a sizeable population for any length of time, nor is there any archaeological evidence that such a population ever lived there. Cities of Canaan fell, but at different times and by different means rather than all at once. There is evidence of a rapid population increase right around the transition from the Bronze Age to the Iron Age (broadly circa 1200 BCE), but there is no evidence of a sharp cultural break. In fact, what can be unearthed seems to emphasize the cultural continuity of the later population with its predecessors. The Israelites seem to be insiders, an integrated part of the milieu of western Semitic peoples, cousins of Moabites and Phoenicians, rather than foreign invaders.
Readers interested in biblical archaeology will find the book illuminating. It is especially useful for its survey of the various attempts by archaeologists to synthesize an understanding out of difficult and sometimes conflicting sources of information. Less archaeologically minded readers will want to skim over such details, paying more attention to the last two chapters, where Dever summarizes his own perspective.
As archaeologists sometimes do, Dever here criticizes some of his colleagues. He is especially critical of Israel Finkelstein who, with Neil Silberman, wrote The Bible Unearthed: Archaeology’s New Vision of Ancient Israel and the Origin of Its Sacred Texts (Free Press, 2001). I have elsewhere reviewed The Bible Unearthed, and although there are differences in detail, the books agree about more than their author’s might care to admit. Both are worth reading.
Who Were the Early Israelites and Where Did they Come From? by William G. Dever. Erdmans Publishing (2003). ISBN: 0-8028-0975-8.
~Jim Dugan