Renaissance Man? Lessons from a Lost Classic on Secularism

In the current (Sept/Oct 2017) edition of The Humanist, former president of the American Humanist Association Lyle L. Simpson marks the centennial anniversary of the modern humanist movement with a brief summary of its improbable beginning in a Minneapolis Unitarian Church, while also mentioning its ancient origins with Greek and Roman literati Epicurus and Lucretius.
Epicurus’ teaching, “centered on each of us maximizing our life here on Earth instead of our life being regulated by the gods”  was “spelled out in detail” in Lucretius’ poem “On the Nature of Things” writes Lyle, and was later translated into Latin and adopted by the Medici family, Florentine rulers in the early 1400s, as a code for living.

Missing from Lyle’s abbreviated history was an entire movement generally referred to as Renaissance Humanism, beginning with the efforts of Italian poet Petrarch, promoting the idea of human progress—only three centuries removed from the Dark Ages—  and as an alternative to the static outlook of Catholic scholasticism. Petrarch’s belief was that in order for humanity to advance and regain “cultural excellence”—and thus “progress”—Classical-era texts and histories of needed to recovered, restored, and thoroughly studied and then emulated in life. He considered the Greek and Roman classical age as the high point of civilization, and emphasized the need to get back to a culture modeled after it. From the late 1300s to the 1600s, humanists went about searching “private and monastic libraries, [the region of] Byzantium, and [interviewing or uncovering works by] Muslim scholars and merchants,” (1)  collating and cross-checking translations for accuracy. The rebirth of the Classical age was the goal, and that would be progress. 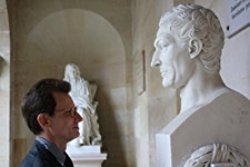 Williams and Bust of Volney

Thomas Christian Williams introduced attendees to the NOSHA September monthly meeting to the signature accomplishment of Constantin-François de Chassebouef, compte de Volney: his book Les ruines; ou Méditations sur les révolutions des empires; author and book hereinafter referred to as Volney, and the English title The Ruins of Empires, or just Ruins. Williams’ lecture, titled “The Modern Day Relevance of Volney’s Ruins” suggested that there can be lessons for humanity in this book he calls a “lost classic,” “lost” even though it was popular in the late 18th and through much of the 19th centuries. ***

Perhaps the most interesting points about the history of the author and book is that Volney was acquainted with Benjamin Franklin, who, in turn, introduced him to Thomas Jefferson during the fledgling days of the American republic. Jefferson apparently liked Ruins well enough to attempt (anonymously) translating it into English, completing about 80 percent of it before abandoning the project to pursue running for the office of President. The remainder of the translation was completed by Joel Barlow and first published in the United States in 1828. The book was read by George Washington (the pre-Jeffersonian edition), Frederic Douglass (Volney was also an abolitionist), Abraham Lincoln (who wrote an essay about it), atheist crusader Robert Ingersoll, poets Walt Whitman (whose “Leaves of Grass”  is based upon) and William Blake, and women’s rights pioneer Elizabeth Cady Stanton. With a list of readers such as these, it should  easy to believe in Williams’ claim that this book of “secular general principles” is one “our species needs in the tumultuous opening decades of the 21st Century,” and is one “people could use to build a peaceful, prosperous, and transparent democracy.”
Williams is, by some accounts, the world’s leading expert on Volney’s Ruins, and that pedigree would be hard to deny. His expertise on the different editions and translations of the book can been seen on the Amazon website under comments section where he himself contributes to reviews of several versions of the book, including in some of them “Five General Rules to Purchase a Jefferson-Barlow Translation”. He is the searching, diligent 15th Century humanist in this respect—making sure the Jefferson translation is properly identified, while giving background on other editions, motivated by the belief that a true understanding and implementation of Volney’s works would be a progressive move forward. Unlike the Renaissance Humanists, though, his reflection to the past is not toward the cultural Shangri-la of the classical Greek era, but rather to a much more recent period of—primarily—intellectual history known as the Enlightenment, of which Volney and Jefferson  could be considered exemplary heirs.
For today’s reader, getting through a translation of an 18th Century French work will probably prove to be cumbersome and tedious. One reviewer describes it as a “belated example of ‘philosophic’ polemics,” so, dear reader,  be prepared to add to the already slightly arcane language layers of hyperbole and obscure allusions; and wading one’s way through it could become an even slower slog for all but the most dedicated scholar. It is here where Williams’ world class expertise is again on display by distilling  the highfalutin and flowery prose to straightforward interpretations for the modern day audience. 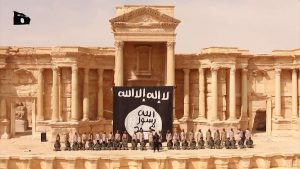 ISIS Execution Event at Ancient Palmyra: Cause and Effect of Fundamentalism

Volney was a secularist, who believed the cause of the demise of empires was rooted in a conflict between fundamentalism and modernity; the fundamentalist system of morality  being based on “metaphysical assertions,” where modernists’ moral code is based on the “physical realities” of nature. And the most evident of all physical realities to living creatures is based on the imperative to survive. Humanity—in the form of  governments and groups and individuals alike—can flourish only by accepting this basic natural law and encourage an ethic of “enlightened self-interest,” which Volney defines as self-interest combined with education, moderation, and always applying the Golden Rule. This ethic, Williams writes in Amazon, is “a direct challenge to Jean-Jacques Rousseau’s Social Contract—if you refute the Social Contract, you refute the moral foundation of the big government social programs that exist in the world today.”

The principle of enlightened self-interest, at least Volney’s definition, may not sit well with many humanists who believe that government social programs are not a bad thing in themselves; on the contrary: it can be shown that they help mitigate many excesses of “self-interest” run amok, unfettered by any enlightened constraints, which has resulted in gross concentrations of wealth and political power in a world of capitalist economics.
But Volney’s ideas of a morality based on naturalism over the “metaphysical assertions” of religions; his promotion of  strict separation of church and state; and his abolitionist stance on slavery should be enough for secular humanists to at least familiarize themselves with his work, but not, as did the Renaissance Humanists, for the purpose of a nostalgic trip back to the past—where they believed were better books and a better life—to aid any attempt to emulate or recreate it in the present.
NOSHA extends its appreciation and thanks to Mr. Williams for his interesting and thought-provoking presentation!
—Marty Bankson