Pray The Hate Away 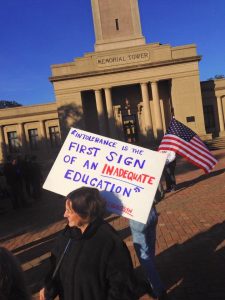 “Pray it away”, indeed; that was but a part of the orchestrated chant put together by the organizers of the “Organize, Reflect, Act: A Day of Action for Justice in Louisiana”, a protest on the LSU campus Saturday against the unholy union of the churchy fundamentalist group the American Family Association and state chief executive Bobby Jindal.  Arriving about thirty minutes early, I was concerned that the turnout was not going to be as strong as hoped; there were only about ten or so people mingling in the chilly sunshine in front of the Bell Tower, but Louisianans, and especially students, are notorious late arrivals, and within 30 minutes the crowd had grown to an estimated 400.

No group of LGBTQs and heathens that large would escape the notice of a diligent street preacher, (witness the French Quarter at Mardi Gras or the Southern Decadence Festival), and the start of today’s activities was no exception, especially given the likely sizeable contingent of preachers on hand for the day’s activities. The wiry fellow was clearly flushed with Red Bull as well as the holy spirit, his carotid arteries straining visibly through his scruffy neck whiskers.

The little guy persisted and followed the group around the block to the main staging area for the rest of the demonstration near the gate entrance into the Pete Maravich Assembly Center. He was soon made inaudible and even less significant when the Master of Ceremonies, a burly, part-time rap artist began introducing the speakers. A total of about 12 people spoke for 3-5 minutes each, a group that included professors, lawyers, student LGBT activists, a young Muslim woman, a city councilwoman from Grambling, La., Jessie Nieblas with the New Orleans Abortion Fund, and an aspiring youthful poet. 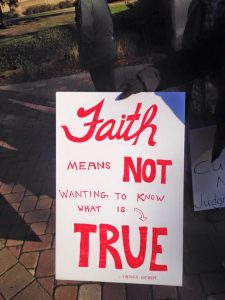 Halfway through the talks, a small army of pro-lifers approached the PMAC in their own march. I am not sure, but I suspect this group was put together after Response organizers realized there would be a protest. I would be misrepresenting the facts if I said it wasn’t a lot of people: there were at least as many as in our gathering. Barricades separated us from the oncoming group, which was then directed toward the ramps that enter the Assembly Center. A few chose to linger, either scowling or trying to stare down our wickedness, and one wannabe masochist-for-Christ got down on his knees on the rough asphalt and waved a crucifix at us for about 20 minutes.

At the conclusion of the talks, we made our way the Student Union and gathered in the ballroom for a panel discussion. Panel members were organizer Peter Jenkins, State Representative Patricia Smith, law professor Jack Harrison, and, now to remain nameless, an Southern Poverty Law Center representative and another of the program’s organizers. The panel did a good job of fielding and answering questions; State Representative Smith was particularly astute and politically motivational, having just been through a week of Martin Luther King activities. An unannounced and almost unnoticed appearance of Zack Kopplin in the audience for a few minutes was not mentioned. I found that a bit curious; perhaps he was on the down low for a reason.

At the conclusion of the panel discussion, four small workshop groups concluded the day. I attended one on social media, the remaining NOSHAN listened to one on grassroots organizing.

“Organize, Reflect, Act” sponsors, participants, and coordinators did a professional job with this project. And mine is just one view, much like theirs, a view from the outside. Inside the Pete Maravich Assembly Center? No one out here really knows if they prayed away the hate or not. But we really doubt it.
~Marty Bankson