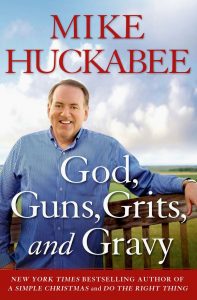 I admit I had multiple prejudices before I even opened this book, based solely on the author and title. Ordinarily, I wouldn’t read a book by Mike Huckabee, one-time governor of Arkansas, Fox News bloviator, wannabe presidential candidate, and Baptist minister. Nor would I usually read a book with a title like God, Guns, Grits, and Gravy. But Huckabee is a notable public figure and has been a best-selling author before, so I decided to give it a try. At least I didn’t pay for a copy, checking one out instead from the public library.

By page seven, I knew finishing the book was going to be difficult. It’s not as bad as reading Ann Coulter, which is like listening to fingernails screech across a chalkboard, but Huckabee’s book is vapid and banal. One would think that someone who has held high public office before and wants to hold higher public office in the future would show some depth of understanding of the issues he raises, would demonstrate an awareness of the interests of the various parties to a debate, and would at least sometimes offer a way forward through the controversy. Huckabee provides none of that here relying instead on empty platitudes and vague superficialities. Baldly theocratic, he feels no need to dig further than the Bible to resolve any dispute. “I believe we live in a God-centered world,” he writes, “and that all the definitions of success, fulfillment, morality, value, family, and life are His to give and ours to follow. They provide a roadmap for us. They also are immutable, meaning unchangeable” (p. 79).

In this book Huckabee describes Americaas divided into two major groups which he labels “Bubble” and “Bubba.” The Bubbles are modern and left-leaning, living in the urban areas of both coasts, best exemplified by the cultures of New York, Los Angeles, and D.C. Bubbas, on the other hand, are traditional, salt-of-the earth Americans who live in less urban areas and value faith and family. The Bubbas are oppressed by intolerant Bubbles, as exemplified by controversies such as those surrounding Chick-Fil-A, Hobby Lobby, and Duck Dynast patriarch Phil Robertson. In each of these, God-fearing Bubbas were “angrily shouted down as ‘haters’ simply because they held to biblical standards on issues like marriage and the sanctity of life.”

One paragraph in the first chapter could easily stand as a summary of the entire book:

“But as much as there is a great divide in this country between the ‘haves’ and the ‘have-nots,’ there is also a great chasm between the ‘believes’ and ‘believe-nots.’ And, increasingly, the ‘believes’ in America have come to feel like cultural lepers – untouchables and undesirables – and an embarrassment to their fellow Americans who equate the holding of traditional views on marriage, religion, family, patriotism, an even the rule of law and the Constitution with ignorance and superstition. The snobbery and bold bigotry aimed at the ‘believes’ goes unchecked and unchallenged by ‘believe-nots’ who call themselves ‘mainstream.’ But such condescending attitudes toward people of faith are hardly mainstream in the geographical center of America” (p. 17).

Would that the book had stopped there! But Huckabee natters on through 240 pages, hitting all the right-wing hot-button issues, but delving with acuity into none. He’s worried that leftists will take away his guns, thinks the Bible settles matters such as abortion and same-sex marriage, disapproves of political correctness and left-wing censorship of right-wing views, detests the “nanny state,” reality TV, and environmentalist extremism, opposes the Affordable Care Act, opposes government regulation of business, and so on.

The only valuable information that I found in the book was that Huckabee and his crowd have a growing awareness that they are considered “lepers” and “an embarrassment” by many of their fellow Americans. One might hope this could lead them to rethink their positions. But the book makes clear that any such hope is unrealistic. It never occurs to them that they are regarded as lepers because they behave as anti-intellectual, anti-modern, anti-social prigs. In their minds, they are oppressed because of their religious beliefs. And in their minds this elevates them to the status of martyrs to their faith. This is grandiose delusion, and it stymies any chance they have of rediscovering reality.

Huckabee and his ilk are free to run their personal lives, their families, and their churches well within the confines of their various doctrines. But they are unappreciative of this fact. It is not enough for them to own guns, choose which church to attend, home-school their children, or to make their own choices about abortion, birth control or whom to marry. They want desperately to make those decisions for everyone else as well. They want to subordinate our secular state to the theocratic goals of one particular variety of Christianity. They want a United States without government regulation of business or guns or health insurance or seat belts or religion or school curricula. But they also want their small and weak government to prohibit abortion, birth control, same-sex marriage, sexual education in schools or sexual content on TV. This they call “freedom.”
God, Guns, Grits, and Gravy, by Mike Huckabee. St. Martin’s Press (2015). ISBN-13: 978-1250060990.
~ Jim Dugan