On Reading, Drama, and Advisories 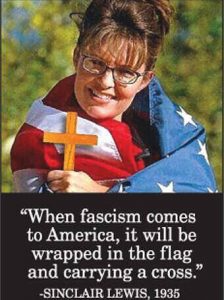 When is a theatrical production not a play? When it is a reading, with  script readers  taking the place of actors and reading—while either seated or standing—the dialogue of a play written for actors by the playwright, and without a designed set or choreographed movement and action across a stage. It is still a theatrical production, but one stripped to the bare bones of voice.

Five of the 13 players sitting in a closely packed row of chairs in front of the conference room-turned-theater at Jefferson Parish Regional Library in Metairie were members and directors of NOSHA in what was a special invitation to participate in a reading of Sinclair Lewis’ play It Can’t Happen Here on. The occasion was the 80th anniversary of its release; the play was adapted and distributed by the Berkeley Repertory Theater. Berkeley Rep, a non-profit community theater established in 1968 is currently running the complete theatrical version of the play at its home base in California through November 6.  It was a special invitation for JPL and our own secular humanist group to participate, as it was one of the fewer that 50 venues in the country that hosted and produced the event on the evening of October 24th.
The story was a preview into what America could look like if democracy succumbed to a political solution lead by a nationalist demagogue. Getting his gloomy inspiration from the election of Hitler in Germany and the rising influence of Louisiana’s populist Governor and Senator Huey P. Long, Lewis followed the career of small town Vermont journalist Doremus Jessup, who, though deeply motivated by the ideals of truth and justice, delayed getting involved in the growing movement that elevated a folksy charmer, a fictionalized authoritarian Long named Buzz Windrip. Windrip ends up winning the nomination of the Democratic Party, and is set to run for (and win) the Presidency against the Republican Trowbridge and Franklin Roosevelt (who ended up running on a third party ticket after losing the Democratic nomination).
Library program director Chris Smith introduced the program and narrated the settings between acts and scenes of the play. Curiously the readers were never introduced to the audience individually; time constraints may have been the reason: the reading took a full two hours, pushing the ending right up against library closing time. The readers seemed well-rehearsed—they spoke with just the right amount of dramatic inflection and were on cue most of the program, though the vocal projection of several waxed and waned at times. There were more characters in the script that performers, so some were required to do multiple parts. It could be a bit confusing if the observer wasn’t familiar with the storyline, especially with no action on a stage or costume changes to help visually associate the different characters.
Probably a more significant motivation than the 80th anniversary for Berkeley Rep’s staff to re-release the program was the current Presidential election campaign and to confirm that, yes, it could happen here. The rise of presidential candidate Donald Trump has uncovered an undertow of a new and septic populism—a populism founded on nationalism and some degrees of xenophobia and racism—and has found in Trump, warts and all, a bona fide advocate. Lewis’ story includes Windrip’s paramilitary Minute Men to deal with dissidents; Trump’s deportation force will be assigned to sort out the rapists and drug dealing illegals and place them on the right side of his Mexican-funded, beautiful wall. A probable adaptation by the Berkeley writers has Windrip reveling at a rally about how protesters were handled in the good old days. The historical Father Coughlin’s and his incendiary anti-semitic radio rhetoric becoming an ally of Long-Windrip parallels the evangelical Grahams’, Falwells’, and Robertsons’ current romance with strongman Trump. The boorish everyday Donald we see is merely a simulacrum of the master wheeler-dealer of foreign trade, the ultimate job creator, and Isis-slayer Generalissimo Trump that he has cultivated and grown “bigly” with assistance from a ratings/profit-driven media. The power of the media in shaping pseudo-leaders and charlatans was a major factor in the rise of yokel Lonesome Rhodes, portrayed by Andy Griffith in the 1958 film A Face in the Crowd, who also had a bad mouth/hot microphone problem, which cost him dearly.

The program of It Can’t Happen Here on the Berkeley Repertory Theater website has the following advisory:

It Can’t Happen Here includes the use of herbal cigarettes, haze, and gunshot sound effects. Berkeley Rep offers an advisory about any stage effect of potential concern to patrons’ health. We don’t offer advisories about subject matter, as sensitivities vary from person to person. If you have any concerns about content, please contact the box office.