The crew of NOSHA volunteers who made the trip to Denham Springs to assist in the cleanup from the flooding that swamped nearly 90 percent of the homes in the area traveled in separate cars—with the exception of Dave and Joyce Thomas, who shared their ride. Joining in on the project with the Thomases were Eve Ortiz, Kathleen Branley, Jennifer Porter, Glenn Pearl, Marty Bankson, and Cecelia (a young woman referred by previously committed Adam Kay). Most used  smartphone GPS  to guide them into the subdivision and onto the street where the project was, but most  all had to park and locate a mailbox along the street to find the house number if they didn’t recognize anyone working outside. The mailboxes were buried along the curb’s edge in the heaps of soggy mattresses, broken dining furniture, stacks of wadded clothes, and rolls of ragged-edged carpeting. A small hill of ruined doors, millwork, cabinetry and sinks and fridges would continue filling the front yard from the street back toward the house as the day passed. 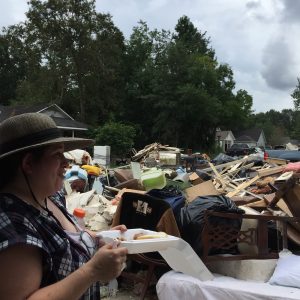 The Thomases’ acquaintance Paul was coordinating the work. Paul calls Connie Donovan “Aunt Connie”—though their actual relationship may have been less direct. Connie is a 63-year old widow, living alone, and is still working. She was one of the fortunate few who had flood insurance, if “fortunate” is indeed even fit in the description of a  500-year flood.

Many of the modest houses in this neighborhood were built on piers and were elevated about three feet above the ground, but the neighborhood  got  6-7 feet of floodwater from the overflowing Amite River just to the west of it. The math of that equation added up to more than three feet of water in the house . Every house in the subdivision and many more subdivisions like it went under, along with most of the business along the main thoroughfares.

Paul got the crew quick-schooled and started at the basics of house gutting: taking the door and baseboard trim off with hammers and pry bars, removing the electrical switch and receptacle plates, then pulling the soggy sheetrock from the wall studs at the seam four feet above the floor. Then the crumbling and saturated mess had to be shoveled and wheelbarrowed out of the house down the front porch steps, adding more to the misery of the front yard. Bathroom vanity cabinets, toilets, kitchen cabinets, pots, pans, dishes and foodstuffs in the pantry all had to go. Two mice were sent scampering  when their space inside a wall was uncovered. 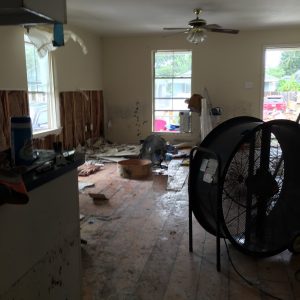 The feeling of overwhelming loss never seems to be strong enough to keep the victims from finding something—anything—left in the wreckage that was salvageable, something to cling to; and those things become special and dear. Aunt Connie had set up a makeshift table in the front yard near the driveway, where she placed and cleaned and dried some things she found. Maybe a crystal dish; maybe a child’s trophy from a past school competition, or a stuffed panda that had been placed on a high shelf: things once mundane and overlooked now became priceless survivors. A pop-up summer shower was about to spoil what the floodwaters missed as she fussed over them, but we managed to get some scraps of plastic sheeting and a tarp over them before the hardest rain fell.

About midday someone delivered some go-boxes of jambalaya; so those that didn’t pack a lunch didn’t go hungry. And there was plenty of water for hydrating, but Cecelia had an overheating episode anyway. She later seemed confident that she had recovered to point of being  able to get to her car and drive back to New Orleans. The heat and humidity was reminiscent of the hot tropical conditions that smothered New Orleans after Katrina. Joyce and Dave’s experience in the Katrina disaster was evident as they breezed through the day’s work like small potatoes, as if pantomiming “¡No problema!”. 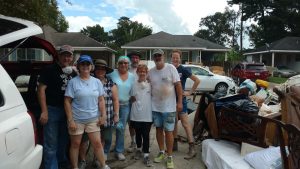 This volunteer effort was the most labor-intensive the NOSHA Social Aid and Pleasure Club has experienced; a true test of physical stamina and heat tolerance. But it may be remembered also as most edifying when thinking of Aunt Connie’s words of appreciation and thanks to each of us; and when reflecting on her little makeshift table, and the keepsakes that took on a new and special meaning for her—and for us.