NOSHA’s Social Aid and Pleasure Club: Helping at the Holidays! 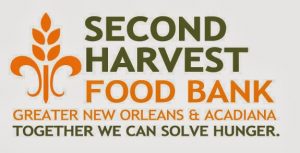 As 2015 comes to an end, NOSHA members came together once again to volunteer at the Second Harvest Food Bank. While families and friends all across the nation start preparing for their end of the year festivities, many see the need to give back to their communities through volunteer work. This time of year is about giving; giving our time and our labor can be the best gift of all. Food banks and soup kitchens are a good choice for helping the neediest. For a few selfless hours, we ensure that many will eat another day.

NOSHA members have proven time and again that hard work does not scare us away, and our December 5 shift was no different. In past visits we helped to box up the food to be distributed to 474 locations throughout the 23 southern most parishes of Louisiana. By now we pretty much have a system down for the “boxing” room. The most recent visit presented us a new task. We were to sort the foods that would eventually go to the “boxing” room.
At first, it seemed a daunting task as we listened to the employee go through the instructions. In the middle of the room were several crates piled high with the donated foods that we would be sorting. Bordering the edges of the room were the many categorized boxes we were to fill. As an extra incentive, we were told that the foods that we sorted that day would end up on kitchen tables in time for Christmas dinners.

Organized chaos is what comes to mind when I think of that day! We eagerly dove in, and although some of us seemed a bit confused in the beginning, we all quickly fell into step and were sorting like it was our second nature. Organizer and NOSHA member Glenn Pearl commented that if one was to look down on us it would have looked like a bunch of ants toiling about—we were definitely a determined bunch. The speed with which we were moving — in, out, and around each other— it is surprising there were no accidents.

In the short four hours that we were there, we not only accomplished our goal of giving back to the community, but we all also got in a good physical workout. By quitting time we had emptied all the crates and had sorted a whopping 9,000 pounds of food. Thanks to Glenn for organizing another successful outing by NOSHA’s Social Aid and Pleasure Club. We’ll be back in 2016 most definitely!