Humanism (and NOSHA) Goes to Church! 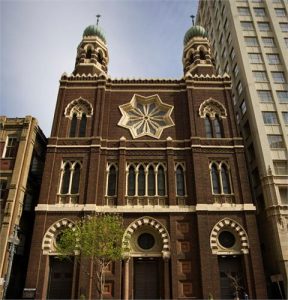 Mr. Alan Wolfe helps coordinate the “First Tuesdays: Spirituality in the City” speaker series and acts as the liaison between the guest speakers and a the co-sponsorship of The Immaculate Conception Jesuit Church and several other Catholics entities. Now in it’s seventh season, guests from diverse religions, human interest groups, and prominent leaders in local government and business are chosen to “initiate conversations about their spiritual traditions and address the theme ‘Spirituality in the City’.” We met up with Mr. Wolf at the front steps of the grand 160-year old Immaculate Conception Jesuit Church—with its Moor-influenced architecture of onion domes and pointed arches—less than a block off Canal Street in the Central Business District of New Orleans. He shuttled us down a pedestrian alley between the church and the adjacent Lenes Hall, the parish center for the church where the group meets.

Scrolling through the list of past speakers, one finds representatives from Buddhist, Muslim, and Jewish traditions; journalists and authors, including Jason Berry, Bob Marshall, and John Barry; and local celebrity chefs Leah Chase and John Besh. Tuesday, December 1, the bar for diversity was set a bit higher, even by the liberal standards of the Jesuits.
“We had a speaker from the Unitarian Universalist Congregation a while back,” Wolf told me after Tuesday’s presentation, “but this was the real deal.” The “deal” being the presentation of a humanitarian, ethically positive outlook on life based on naturalism rather than traditional theology, gods, or laying claim to an ethereal spiritualism, courtesy of the New Orleans Secular Humanist Association (NOSHA).
***
NOSHA President Charlotte Klasson and Membership Coordinator Beth Deitch spoke on the theme “Humanism: Ethical, Secular and Good for Everyone” in a coordinated tag team effort before a group of about 30 there for the midday talk and light lunch affair. Deitch started by defining terms: Humanism, naturalism, consequentialist ethics—all fitting together in overlapping  meanings and nuance, and building on a comprehensive outlook on life through the “self-aware moral agent” that the human is. Klasson gave the audience a brief history of NOSHA from its beginnings, its affiliate groups, and its function as the only local organization of its type for people sharing a non-theistic, naturalistic worldview. She stressed the importance of being vigilant about church and state separation issues, and pointed out Harry Greenberger’s (NOSHA President Emeritus) multiple ‘secular invocations’ at city council meetings to balance the typically Christian bias at that part of the meeting agenda.
Beth referred to cognitive scientist and linguist Steven Pinker’s recent  book, The Better Angels of Our Nature: Why Violence Has Declined. Pinker’s thesis, that, in spite of appearances, violence in the world is decreasing, could  be traced back to the tradition of the Enlightenment movement of the 17th and 18th Century Europe and America, which held as axiomatic that there are knowable truths in the world, which, when discovered through the scientific method and rational thinking, would lead to an increasing improvement of the human condition—and less violent behavior—over time. This is a foundational concept of secular humanism.
During a brief Q and A segment at the end, several of the typical concerns about a godless world were brought up by thoughtful listeners. One questioned how humans could have been the basis of their own positive ethical behavior. A: The primary motivation of survival has shown us that cooperation and altruism are necessary for maintaining and propagating life. Another question from a priest in the audience was how values of good and evil, right or wrong can emanate from the naturalistic materialism that humanism claims—a problem Kant had, he added. A: The problem of consciousness remains unsolved, and the solution to the question lies in the theory of consciousness itself. (And besides that, our consequentialist ethics are “at 180s” with Kant’s categorical imperative, or universal and unswerving morality Kant thought could be  derived from rationality.)
Maybe the most relevant question—at least as it related to the theme of “Spirituality in the City”—came from a dapper man near the front, who wanted to know if humanists have anything they call spirituality. “The term is problematic,” said Deitch, as the ambiguity between spirituality being something that comes from some real but intangible spirit, which we reject, or if it is something more like a sense of awe or wonderment, a magical or enchanted mental state. Apparently he had been unmoved by an earlier partial reading of Carl Sagan’s ode “Pale Blue Dot” which, for many, stimulates an awe that comes from man’s realization of his insignificance in the grand scheme of things. Perhaps the observation of theoretical physicist/cosmologist Lawrence Krauss, though not quite as lyrical, but no less poetical, which invokes a sense of wonderment by a reversal of tack, placing man as a shining product of the grand scheme of the universe, his bodily makeup the result of elements manufactured in solar furnaces, and then spread by the exploding aged stars and spread as elemental fertilizer to create untold diversity in the cosmos.

And maybe when it is shown that spirituality is possible without spirits, numen, genies or poltergeists or gods, will we better appreciate the “real deal.”