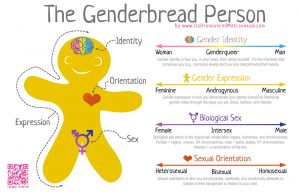 This graphic may be hugely helpful to anyone who is grappling with the terminology and definitions for sexuality, gender expression, and identity that can be confusing at times, especially if some of the terms have been used interchangeably (or that people think they are).

From the text for the “Genderbread Person”:

Gender Identity is how you, in your head, think about yourself. It’s the chemistry that composes you (e.g. hormonal levels) and how you interpret what that means. Woman < Genderqueer > Man

Gender Expression is how you demonstrate your gender (based on traditional gender roles) through the ways you act, dress, behave, and interact.  Feminine < Androgynous > Masculine

Sexual Orientation is who you are physically, spiritually, and emotionally attracted to, based on their sex/gender in relation to your own. Heterosexual < Bisexual > Homosexual