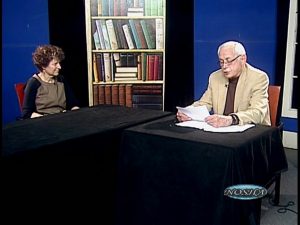 We want to plug what we consider to be a real feather in our cap or gem in our crown (or whatever you want to call it) as a secular humanist organization that has grown over 15 years. Very few groups of our size can say they have a television show that has been around over ten years now.

“New Orleans Humanist Perspective” is the brain-child of Harry Greenberger, President Emeritus of NOSHA. He’s been taping interviews with two people per month with only a few exceptions – and those absences were because he fell down on a wet marble bathroom floor and broke his leg a few years ago. So, he’s a stalwart television producer and personality unlike many you’ll ever meet in the Community TV realm!

He is able to find the most unusual and interesting people and prepares skillfully for a complete show. From his intro to his last few seconds, he makes it look easy. He has opened his chair to a couple of guest hosts who’ve stepped in from time to time so he can relax for a while (most recently, NOSHA Vice-President, Jim Dugan has become his pinch hitter), but it’s always a treat when he brings up his next guest or inquires about our opinion of potential topics. He’s recently completed his 172nd interview and it’s an understatement to say that we’re proud and honored to have his energy on our board.

You can can catch this show on COX Channel 76 on Sundays at 2:30pm, on YouTube, at the NOSHA website or on Vimeo. Check it out and let us know what you think.