Do Unto Others: Are we teaching citizens what the First Amendment really means anymore? 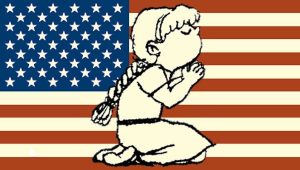 Apparently, a Morgan City high school recently had a mandatory assembly for Veterans’ Day, and an invited guest led that assembly in an explicitly Christian prayer. This, of course, is unambiguously illegal. A student complained to the American Humanist Association, which sent a letter to the district, threatening legal action. The district superintendent was quick to state that the prayer fell outside of district policy. One can only hope that this settles the matter.Perhaps of more interest than the school’s malfeasance itself was the reaction of many Louisianan’s to the news coverage. The Advocate newspaper reported on the incident on November 19th, and online comments were loaded with howls of protest from religious believers. “It is our right to prayer. Why do we have to give up our right?” asked one writer. Another asserted, “this is America. God bless America and in God we trust. If we want to pray, we will do so. You don’t like it, just leave.” “Release her name [and] see how soon this will end!” demanded another. One boldly recommended, “find out who she is and send her ass up north! Screw those people! Why should the so few have power over the majority?” One writer asked, “where does it say that you can’t pray in schools?” Such comments are disturbing for deep intolerance they reveal. Perhaps more importantly, they are also disturbing because they show how poorly many Louisianans comprehend the Establishment Clause of the First Amendment. The rhetoric of victimhood poured out by the Religious Right severely skews public perceptions.

Such comments are disturbing for deep intolerance they reveal. Perhaps more importantly, they are also disturbing because they show how poorly many Louisianans comprehend the Establishment Clause of the First Amendment. The rhetoric of victimhood poured out by the Religious Right severely skews public perceptions.

This particular incident is not at all about whether an individual can pray in public schools. Students and employees are within their rights to pray in school, silently and individually, when attention is not required by school duties. Within some limits, a group of students can meet voluntarily for prayer, during non-instructional time. But what happened in Morgan City was neither student-led, nor voluntary. It was school-led prayer before a captive audience.

There is also no issue here of minorities or majorities, nor of who is a believer or non-believer, nor of who is or is not offended. Even if every student and parent associated with a certain school attended the same church, even if no individual were offended, it would still be illegal for that school to lead its students in prayer. Whether many Louisianan’s understand it or not, public schools are state agencies, and as such the Establishment Clause fully applies: no public school can endorse any religion.

None of this is new. Arguments and lawsuits over religion in schools date back at least a century. Questions about prayer and Bible-reading in schools were unambiguously settled over fifty(!) years ago, in the 1963 Supreme Court decision known as Abington School District v. Schempp. But much of Louisiana still struggles to adapt to 1863, let alone to 1963.

Unfortunately, many Louisiana public schools have long ignored the clearly settled legal facts. As multiple ACLU suits against Tangipahoa schools and last year’s consent decree signed by Sabine Parish schools show, prayer and other religious indoctrination at school remain ingrained in Louisiana culture. Sadly, this choice simply to ignore the Constitution has communicated to many citizens that prayer in their schools has been legal all along. When someone complains, the public sees this as something new, as outside agitation, pandering to a minority, or as “liberal judges legislating from the bench.” It’s as if they were caught stealing a bicycle, and then claimed they themselves were the victim because nobody every complained the other ten times they stole a bike.

This incident could easily have been avoided. Officials at the Morgan City high school could have used common sense, followed the district’s own written policy, or consulted documents available from the state Department of Education. They could simply have included a moment of silence in the program. Within that moment of silence, students who wished to pray could have done so, and no one of a different religion or no religion would have felt compelled to participate. Thus everybody’s religious beliefs and constitutional rights could easily have been accommodated. But somehow, this is never enough for some religious activists. There are always those who want to turn public schools into factories producing religious believers.