May the Circularity Be Unbroken 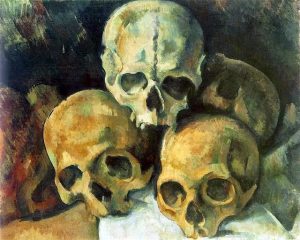 Pyramid of Skulls by Paul Cezanne

Have you wondered why so many people believe in a literal interpretation of the Bible, that the book is an “inerrant” document and all the tales, histories, biographies, and timelines are undeniably true and accurate? With just a little reading and reflection of the book, wouldn’t it be obvious that there are too many inconsistencies, contradictions, and second-to-none tales of imagination and fantasy for anyone to believe? To understand why anyone would, it might be helpful to trace the origins of the idea and follow one possible thread of circumstances leading to it.

Karen Armstrong’s The Bible: A Biography follows a historical trail from what she believes is the origin to a period in the early Twentieth Century. Armstrong says that the claim of biblical inerrancy is a relatively recent phenomenon—really getting started less that about 150 years ago—and earlier interpretations (of the limited few who had the opportunity to read and evaluate the material) accepted the more realistic viewpoint that the Bible, while serving as the foundational narrative of Western religion, was also rich with allegories, mythical representation, and presented a morality play sui generis of good versus evil.

But in the late 18th Century, philosopher Baruch Spinoza claimed that the Bible could not have been of divine origin given the number of contradictions, and from that conclusion began construction of his “pantheistic” interpretation of the worldly order.

His criticism would become known as the “Higher Criticism” (later called “historical criticism”) and was taken up for study by other contemporaries of the age: “By the end of the eighteenth century, German scholars led the way in biblical studies and were taking Spinoza’s historical critical method to new lengths…” (1) leading to the revelation ”By the nineteenth century, it was generally agreed by the scholars of the Higher Criticism that the Pentateuch was a combination of four originally independent sources.”(2)

These sources, writers or transcribers, would come to be designated J (Yahweh), E (Elohim), D (Deuteronomist), and P (Priestly) and are still the standard model for interpreting the different nuances of style and terminology of the Torah. Moses as the author was now officially debunked.

It didn’t take long for the thoughtful among the devoted to realize that this was a problem—the sole foundation, the surviving written account and singular record and history of Judaism and Christianity was now shown to be error prone. And if one or many— each and every error contributed to devaluing the veracity of the whole. Making things worse, the results of these critical works was reaching a larger audience— people of modest means were by now beginning to have greater access to the printed word. Specifically, a work called Essays and Reviews published in 1861 by seven Anglican clergymen created an such an uproar that little attention was given to a work published two years earlier that would soon become the most formidable and durable challenge to the seven day creation of a young earth related in the Bible: Darwin’s The Origin of the Species. But “Darwin did not attack religion and at first the religious response was muted.”(3)

The challenge to the divine inspiration of the holy book now firmly defined, apologists for inerrancy scurried from the woodwork. Pastor Dwight Moody published Many Infallible Truths in 1895, nine years after founding the Moody Bible Institute; Archibald Hodge and Benjamin Warfield of the Princeton Theological Seminary worked together on an 1881 article about the inspiration of the Bible, and Warfield would later publish the book The Inspiration and Authority of the Bible. “The belief in biblical inerrancy, pioneered by Warfield and Hodge, would..become crucial to Christian fundamentalism and would involve considerable denial.” (4)

The foundation for perhaps the largest intellectual scam in the history of Western thought was now laid, brought about as a reaction from fear (rather than a result of a premeditated conspiracy)—a fear of a loss of trust in a fable-backed religion which had heretofore been such an easy and accessible method for gaining and maintaining power and control of the innermost psyche of a populace needing and searching for security in a tumultuous world. The gross circularity of the apologetic, buried in volumes of abstruse verbiage made it particularly offensive.

The beginning of the 20th Century opens with a widening web of anti-Enlightenment thought, with fundamentalist Christianity assuming an interdependent and participating role in cultural and political developments. Unencumbered by “empirical correctness”, fascist ideologies flourished, often using the fundamentalist assumption of a self-sovereign, Higher Authority as legislator, judge, and executioner. In the Age of Modernity, a population just recently introduced to the seemingly unlimited possibilities of progress through science and world peace from toleration and pluralism was now confronted with what Karl Popper saw as the paradox inherent within, set like a trap to reverse 300 years of achievement.