Distortions and Lies: The Truth Behind the RFRA 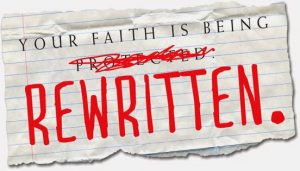 The recent controversy created by Indiana’s peculiarly egregious version of a Religious Freedom Restoration Act (RFRA) has finally brought public attention to the essential deceit embodied in such laws. I hope most voters can recognize the many lies embedded in and told about the various state and local RFRAs. A few examples:

Lie #1: Some religious freedom has been lost. You don’t use the word “restoration” until after something has been lost, or at least is under a direct and present threat. But when pressed for details, no RFRA supporter can come up with a credible example of any such loss or threat. The plain fact is that religious freedom in America is as strong as it has ever been.

Lie #2: Churches or clergy will be forced to perform gay marriages. The freedom of churches and clergy to make religious choices about whose marriages they will or will not solemnize is well-established at law. RFRA-proponents raise the specter of clergy being sued over refusing to perform a gay wedding just to frighten the uninformed.

Lie #3: Businesses are being forced to “perform” or “participate” in gay weddings.  Pro-RFRA rhetoric often deliberately confuses the way support businesses relate to a wedding with the way clergy and churches relate to a wedding. Florists, bakers and photographers are businesses, not churches. They are not performing nor participating in a wedding. They are selling goods and services. They know that, aside from a joke, they cannot put up a sign saying “whites only” or “no Irish need apply,” and they know they can’t proclaim “no Catholics” or “Trinitarians only.” “Heterosexuals only” would be just as ridiculous and just as offensive.

Lie #4: Refusing service to a same-sex wedding is a religious issue. There is, of course, no Christian prohibition against baking a cake for a same-sex wedding, nor delivering flowers, nor photographing a wedding, nor serving as pediatrician to a married Lesbian couple with a new baby. If anything, Christians are compelled to treat their neighbors with kindness and dignity regardless of religion. Refusing to perform such services is entirely political, not religious at all, and RFRA-proponents are trying to masquerade political action as religious belief.

Lie #5: RFRAs are about something other than same-sex marriage. The timing of RFRA legislation, coupled with the complete lack of any credible threat to religious freedom, makes it clear that these laws are about same-sex marriage. America is far from unified on this topic, but public opinion has shifted dramatically. Opponents of same-sex marriage have lost this battle in the culture war, and lost badly. RFRAs are a last-ditch attempt to deny to inevitable.

The blowback in Indiana has temporarily halted some RFRA legislation, but the movement will not stop here. There will be many opportunities to inspect RFRAs and related legislation for the lies outlined above, and for others as well. One place to begin is with Louisiana StateRepresentative MikeJohnson’s proposed “update” to the state’s existing RFRA. This bill will specifically eliminate state power to enforce non-discrimination laws, although it will be portrayed as something other than what it is.