BOOK REVIEW: Churchless: Understanding Today’s Unchurched and How to Connect with Them 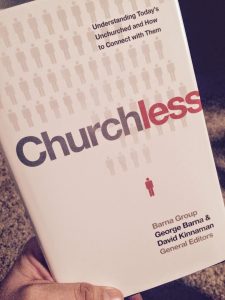 The Barna Group is a Christian organization that does sociological research for churches and other Christian institutions. One of their recent publications is Churchless: Understanding Today’s Unchurched and How to Connect with Them. If you’re interested in how Christians see those who’ve left the faith and why, Churchless could be a fascinating read.

Christian organizations are painfully aware of America’s increasing religious diversity and secularism. Through reports like Churchless they get a better understanding of the large and growing percentage of Americans who have no church affiliation. Surprisingly, only about 25% of the “unchurched” are agnostics or atheists. A majority are Christian believers of various sorts, who have chosen not to participate in any formal church. The unchurched form an increasingly diverse group, slowly becoming less white and less male, while becoming more educated and more geographically dispersed throughout the country. Those leaving Christian institutions are making informed decisions, as they are experienced both with Bible reading and active church participation.

While the authors point to the many distractions of modern life as factors that contribute to increasing churchlessness, they are also willing to consider that churches are driving members away. A common complaint among the churchless is that they were unable to feel the presence of God in their church experience, and the authors point out that this is also a common complaint among active church members. They’ve also analyzed the attitudes of active church-goers along such lines as whether they see value in all human beings, even those of different faiths, or whether they see believers and unbelievers as having different intrinsic values. The Barna Group’s startling conclusion is that 51% of active church members are more “pharisaical” than “Christlike.” By these loaded terms they mean that many of those sitting in church pews fall short of the Christian ideals of tolerance and civility. This is not news to many of the unchurched, who have been trying for decades to get this message across to church leaders. That message may have more weight in a book like Churchless, because it is a criticism of Christians by Christians.

The writers seem to come quite close to, and yet to miss, the realization that many ex-Christians reject Christianity in two layers. The outermost layer for many former Christians who’ve become agnostics or atheists is doubt or denial of the existence of God, certainly a sufficient reason to stay out of church, but often not the whole story. Many non-believers have a second layer of criticism, which is that they would not want to be like many of the practicing Christians they encounter, even if they felt more certain that God existed. Whether that second layer of rejection is based in the ways many visible Christians and Christian institutions fall short of their own ideals, or in a deeper deficiency in Christian doctrine, is a thornier question not examined in this book.

Reading Churchless really brought home to me the vastness of the chasm that separates the Christian worldview from the worldviews of non-believers. The writers are unwaveringly certain that Christians “are the stewards of the truest story about humanity and God.” They use phrases such as “the presence of God,” “discernment” and “wisdom” as if they are unambiguously clear and identify tangible goods that churches can physically deliver. They never doubt that first-century scripture is still an adequate guide to the major life issues of people living in the twenty-first. Churches may find ways to reconnect with the churchless who still hold some faith. But I see little hope for them to reclaim the skeptics, as long as they continue to behave as if hopelessly vague buzzwords can be useful in the real world.