Walter Kaufmann (1921-1980) was a philosopher, translator, and poet. His translations and interpretations of Nietzsche’s work are considered by many of his contemporaries to be the standard; and the influence of Nietzsche’s and other 20th Century philosophers and psychological theorists of the early modern age—as well as his poetic bent—are evident in this excerpt from Critique of Religion and Philosophy (Princeton: Princeton University Press, fifth paperback printing, 1990) in a chapter titled “The Core of Religion.” 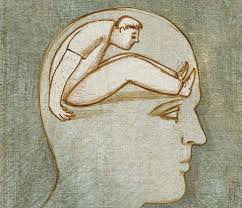 Man is the ape that wants to be a god. Perhaps there is a thrust beyond the present, beyond itself, in all life; possibly even in lifeless matter. In man this thrust has become conscious aspiration, conscious self-contempt. Man is unhappy in his skin and cannot shed it. He wants to abandon himself and attain a higher state of being. He is only too willing to believe that this longing will be satisfied up his death, but he will not be put off until then. In love he seeks abandonment, transcendence of his everyday existence, another state of being. The Greek myth gives expression to this longing. So do art and morality, philosophy, and religion.

Man is the rational animal; but what is reason? A thrust beyond the present and an education in self-contempt. From this presence and this and this, man projects the concept “crimson” and “circle” and “courageous. ”Then he can say: this is not a circle though I tried to draw one. And he can say: I was not courageous. He can criticize himself. For general concepts are so many norms, and every norm is a rebuke and can be a spur. Reason enables ma to strive consciously to transcend himself.

Primitive moralities may be partly superstitious, partly utilitarian; they are also expression of man’s dissatisfaction with humanity, of his aspiration to be other than he is. While most human activity is found wanting, like the winter, some of it, like the spring, is experienced as a promise of immortality and the conquest of imperfection. What man craves is a break with his everyday existence; but the ecstasies of the dance and the transports of love do not last. Religion is an attempt to make bliss enduring, and ritual is frozen rapture.

That spontaneity which, like the thawing wind, cracks the ice of custom and is felt to be the herald of a more exalted life becomes tradition: a tune or a dance that was the gift of abandon, evanescent as the wind, is repeated religiously; and a figure, carved from wood, or a graven image, enduring moments of unprecedented creation, are worshiped as living symbols of a higher state of being and become idols.

The mystical experience become a conscious goal to be reached through breathing exercises and a detailed regimen, and the stammerings of the ecstatic become normative for future generations. The prophetic seizure is induced by dances, and the prophet’s poems are canonized.

Religion is rooted in man’s aspiration to transcend himself. It does not merely satisfy needs—many more needs than most psychologists give it credit for—religion has, if not created, cultivated needs which no longer allow man to feel at home among the other animals.

Reporting for The Humanist Advocate—