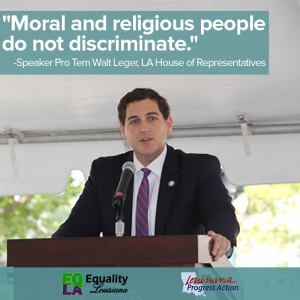 It’s good to see various communities in New Orleans and across Louisiana getting organized against the proposed “Marriage and Conscience Act,” H.B. 707. Reacting to the possibility that the U.S. Supreme Court will make same-sex marriage legal, even in behind-the-times Louisiana, HB 707 ensures that the Louisiana cannot enforce any of its state laws regarding discrimination and public accommodation, provided that an individual or business acts out of moral convictions about the institution of marriage. Supporters of the bill reach new lows of disingenuousness when they claim it would not authorize any kind of discrimination. Technically, the bill does not make discrimination legal, but in any practical sense it completely neutralizes state power to act if discrimination is motivated by values attached to marriage. It clearly sends a message that those who wish to discriminate are free to do so.

HB 707 should not be confused with so-called “Religious Freedom Restoration Acts” (RFRAs), because HB 707 contains critically different language. It prohibits the state from acting against discrimination that is motivated by “a religious belief or moral conviction about the institution of marriage.” For one thing, HB 707 does not require that religious beliefs be “sincerely held,” as many RFRAs do. Secondly, HB 707 also allows discrimination arising merely from “moral conviction,” rendering irrelevant any argument about what is or is not a “religious” belief. Obviously, “moral convictions about the institution of marriage” is hopelessly vague language, opening the door to all kinds of abuse.
HB 707 might be amended in ways that narrow the basis of discrimination that it protects. One proposed amendment would narrow protection to actions arising from beliefs or convictions “that marriage is or should be recognized as the union of one man and one woman.” This would eliminate some problems, though certainly not all. The passage of this particular amendment is far from certain, though, at least in part because it exposes the anti-gay animus that is at the heart of the bill. Such an amendment would raise the odds of an Equal Protection challenge.
Choosing up sides is already well underway. Marjorie Esman, Executive Director of the Louisiana ACLU, provided a scathing condemnation of the bill in a letter to The Advocate on April 21st, pointing out terrifying consequences of HB 707 as written. Unsurprisingly, a letter supporting the bill was penned by Reverend Gene Mills, Executive Director of the Louisiana Family Forum, a group notorious for its anti-gay, anti-abortion, anti-science, anti-woman activism. More disturbing was a screed from Louisiana’s part-time governor and full-time presidential wannabe, Bobby Jindal, published in the New York Times. It’s an explicitly Christian, anti-liberal and anti-gay hit piece that is also oddly (coming from a Republican) anti-business. Mills and Jindal both try to paint Christians as the true victims of discrimination, and both shamelessly misstate the likely impact of the legislation.
If the backing of Jindal and Mills is not enough to demonstrate the theocratic impetus behind HB 707, one need only look into the background of the bill’s author, recently elected state Representative Mike Johnson, R-Bossier City. According to Wikipedia, Representative Johnson is an attorney, a trustee of the Ethics and Religious Liberty committee of the Southern Baptist Convention, a senior counsel with the Alliance Defense Fund, and a member of the Louisiana Family Forum.

There was a meeting in New Orleans this Thursday (4/24), hosted by a coalition of organizations like Equality Louisiana, Louisiana Progress Action, Louisiana Trans Advocates, and others. The short-term plan is to work to keep HB 707 from getting out of committee, and with legislators worried about business backlash, this could actually happen. Those who are interested should monitor www.notmylouisiana.org, which will provide updates on the bill’s progress.

You should also let your representatives in Baton Rougeknow where you stand. You can look up your elected representatives HERE. The bill will next be considered by the House Committee on Civil Law and Procedure, whose members are listed HERE. One of the members of that committee is the author of HB 70, Representative Mike Johnson.