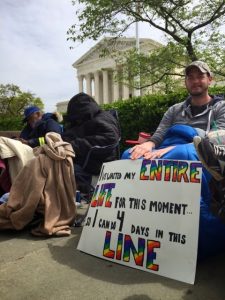 I could hardly have imaged while planning a vacation late last year that one of the days of the scheduled time off would give me the opportunity of a lifetime: a chance to argue the issue of the forthcoming decision on marriage equality before the Supreme Court of the United States.

Not actually arguing the case before the justices of the court, of course, but rather “debating” some of the points with a couple of the devoted End Times prophets assigned to take questions after an announced delivery of reams and boxes of petitions signed “by hundreds of thousands”, reportedly, to voice opposition to expansion of marriage rights. I came with just one prepared question.

“Is marriage a civil contractual agreement or some sort of religious ritual or oath?” I asked the woman with a big voice and puffy pink insulated ski jacket. 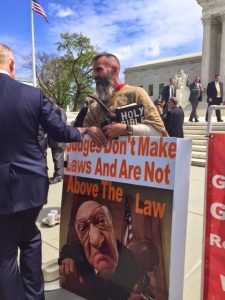 “Marriage is a sacred union of a man and woman blessed by Jesus Christ,” was her answer.

“Then you are saying it is a religious affair. So why is it that I did not have to go to a church or any officer of any religious affiliation to get a marriage license, or to have have the ceremony?” asked I, playing a little dumb, a little coy.

“What about the First Amendment, what about the separation of church and state?” I could sense I was getting close to her “final answer”.

“The First Amendment shouldn’t have been!” she interjected, “God’s law trumps man’s law!”

Time to redirect. “OK, God’s law. So do you believe in Shariah Law?”

“I absolutely do NOT…that’s the Devil’s religion!” she chimed back, rather indignantly. At this point her bearded, burlap bag robed accomplice told me, in no uncertain terms “This ain’t no Mooslum country, it’s Cristiun!”

A youthful, self-proclaimed gay man had come up showing an interest to get involved in the discussion and was a welcome reinforcement: It had become apparent that the antagonists had not refined their arguments enough to carry on a keen, reasoned debate, and rather than get myself worked up into a day-long tizzy, I retreated quietly back into the crowd, my day of arguing before the Supreme Court finished, my Mitty-esque flight into the annals of “Equal Justice Under Law” (1) dissolved into the reality of just another day, another vacation.

(1) Inscription on the frieze of the Supreme Court building.