A Night To Remember with Psychic John Edward 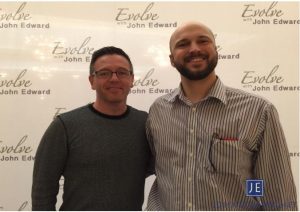 Earlier this month, I was given the gift of a John Edward event. A good friend of mine wanted me to see for myself the powerful psychic abilities of Mr. Edward, so she bought us tickets. She had seen him once before in Baton Rouge, but had not gone to the additional “after event” on that occasion. So, she splurged and got us both “upgrades” for the extended show where John gets more personal. This was my first live experience seeing a medium doing readings with the audience, and I was curious to see if he could convince me to believe in his abilities, so I humored my friend and accepted her expensive gift. Also, this is my first attempt at writing a blog post, so I ask that you excuse my lack of experience in this and bear with me.

I would like to start my description of the evening with some plain statements of how the event occurred. First, the tickets! They were $150 per person, and the upgrade was another $75 per person. I counted five sections of 80 chairs in the hotel ball room where the event was held, and it was nearly packed, if not sold out. So, I’ll say at least 350 people were in attendance. Roughly half of the audience stayed for the extended show, so I’ll say about 150 people must have ponied up for it. The math tells me that comes out to be $63,750 for three total hours of work before paying anyone or covering expenses. To be a little more conservative, I will round down the total take to $60,000.

Now, John does not do all of this alone. He has what I will call the show director, an aggressive but friendly lady responsible for organizing the crowd and getting everyone checked in. Also, there were at least two other women working as assistants by taking tickets and passing out microphones. I am not sure if the sound man and personal security guard were hired locally, or travel with him, but the two of them had to be paid as well. No catering was required – only the large ball room and 400 chairs. The vast majority of the audience was women, and probably half of them were middle aged and up. I guess it may have been 20-to-1, women to men.

As for John Edward himself, I learned a little about him, too. He is very friendly and likable. He came on stage in jeans and a plain shirt, and if you didn’t already know who he was you would never guess that he is a famous psychic. He explained himself for a few minutes, stating that he has been doing this for 30 years. He assured the crowd that he does not have a gift, but an ability. The gift is from the spirits that communicate with him and pass messages through him. He is married and has children who he evidently calls between the main event and the “after event”. He also spoke on positive living, positive energy, chakras, and a bit of astrology. He told his story of discovering his ability as a teen when his mother had a psychic friend come over and give readings. At that time he said he wanted to test this purported psychic with questions, so he did, and was astonished when what she told him was true, even things no one else could have possibly known about him (spooky, right?). He continued by explaining his approach as a teacher, and that he used to show more patience with his audience (my words, not his), but felt he was not being his true self, which is a smart ass (his words). So, he warned us that if we said something stupid, he would call us out on it. And this was in addition to being informed that we could be asked to leave if we were caught using our phones or any recording devices.

The real fun began when five audience members were randomly chosen to ask a question of John. So, scattered about the room were five women who received a microphone, and waited for their turn. However, midway through the questions, John began his readings, and expressed mild surprise that it was happening, because he didn’t think it was time yet. He started by pointing to one corner of the audience, because the spirits were guiding him that way, and he started throwing out clues. I don’t remember specifically what he asked for when he started, but I will give some examples of the questions and comments he offered once the spirits started communicating with him. He used generalities, because the spirits are generally vague. For instance, he said he hears/sees/feels “Karen, Karina, Christy, something with K and R” coming from that area of the room. Then, he waited for responses from the audience affirming someone in that general was, or knew, a Karen, Karina, etc.

He also referenced other common scenarios, such as: someone who committed suicide, someone who overdosed on drugs, a father figure (dad, step-dad, uncle, etc.) or mother figure (aunt, friend, big sister who had to raise you because your real mom died, etc.), someone who works in health care, someone who works in education, someone who died of cancer, and so on and so forth. For every hint at what he was being told from the other side, he would expect a suitable response from the area of the room in which he was being guided. When he did not get a positive response from whomever he was speaking to, he would switch to someone in the immediate area whom did give a positive response. That person would then get to hold the mic until another nearby audience member chimed in with something that fit what John was receiving from the spirit world. This continued for about two hours, as John, who remained on stage, would scan around the room looking for his next reading.

One reading surprised me when the “B” name he was trying to pinpoint turned out to be the family dog who was also at peace with the deceased relatives. In every case, the response from the dead was the same – they chose to speak through John, because it was their way of basically checking in and saying they were alright. He assured one woman, after she told him that she had a tumultuous relationship with her deceased sister, that her sister in fact wanted her to let go, and that everything was alright. He made a bunch of women cry that evening by convincing them he was in contact with their loved ones. John gave comments and details that were general enough to apply to most anyone, but he was clever enough to use more specific examples as they would apply to a situation. It was kind of like a big game of 20 questions, except John was allowed a lot more than 20 questions, and he could start over with another person if he wasn’t getting the right answers. A couple of times he even insisted a person was wrong, thereby forcing said person to think really hard to GIVE HIM A FITTING ANSWER. The man was not revealing anything, the audience was!

The “after event” was somewhat a continuation of the main event, where John came back out and answered as many questions as he could from the audience, as opposed to interpreting messages from the other side. He offered some kind, touchy-feely, new age, positive affirmation ideas for living a good life, and he answered questions about his personal experiences as a medium for the last 30 years. To conclude the evening, he answered a young black lady when she asked what his strongest communication was from the other side. He paused, and asked her age and where she was from. When she told him 38 and Kansas City, he literally jumped for joy and exclaimed “I found you!” It turned out that 10 or 11 years ago he was told by some spirits that he would encounter a middle aged black woman tied to Kansas City, and that he was to train her. Ever since then, he had been searching and waiting to find this mystery woman. So, he told her to see his assistant and give her information so he could contact her. To add to it, her last name was Edwards! Wow! It was very touching, and everyone applauded and congratulated her.

As a final note, I want to say that I am a skeptic by nature, and I only accepted the invitation to this event at my friend’s insistence, and after warning her that it would not change my mind. I did enjoy the show, and I consider it entertainment, if you pardon the toying with people’s emotions aspect. John Edward is a nice fellow on stage, and he entirely gives the appearance of wanting to help people, if you pardon the $150 dollar ticket price and the fact that you probably won’t be picked for a reading. Also, I received a one year membership to his website, and I will be receiving a signed copy of one of his books in the mail for (my friend) purchasing the upgrade to the after event. A small part of me wants to suspend disbelief in this stuff because it feels nice, and it would be nice if it was true, but the rational part of me says it’s just a show. So, if you have $150 to spare, and you want to be a part of mass hysteria, go to www.johnedward.net and look for him in a city near you. Seriously, he has another 40-something events scheduled this year.