BOOK REVIEW: Paul and Jesus: How the Apostle Transformed Christianity 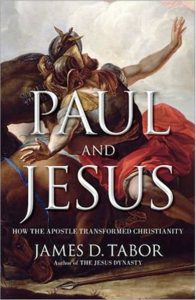 Readers interested in the early development of the Christian religion will enjoy Paul and Jesus: How the Apostle Transformed Christianity, by biblical scholar James D. Tabor. The book focuses on the first 30 to 40 years of the Christian movement, a period that is poorly documented and poorly understood.
Much of Tabor’s assessment falls well within the mainstream of scholarly opinion. Jesus of Nazareth was a real, historical person, although the romanticization of his life story makes it difficult for us to know anything about him. He was an observant Jew of the first century CE, who taught a particular interpretation of Judaism that was somewhat unique, but nevertheless within the known range of varied Jewish opinions of the time. He taught that an end of ordinary history was near at hand. He claimed, or others claimed about him, that he was the earthly Messiah, a political and military leader who would unify the Jewish people and guide them to independence and godliness. After Jesus was executed, his closest followers, including Peter and James, continued his teachings, which became one of the varieties of Judaism that existed side-by-side with others among the Jewish synagogues and communities already scattered throughout the Roman Empire.
The apostle Paul, too, was a real, historical figure. We know only a little more about him than about Jesus, but it is clear that his letters, forming a significant portion of the New Testament, have been hugely influential on the development of Christian doctrine. Tabor, like many scholars, takes Paul at his word when he tells us he never met the earthly Jesus. Paul also claims not to have learned Christianity from Jesus’ human disciples, but from the risen, spiritual Jesus, by means of divine visions. We know from his letters that Paul took Christian teachings to “gentiles,” meaning to non-Jewish Greeks and Romans, while Peter and James focused more on people who already identified as Jewish. We also know that Paul sometimes had disagreements with Peter and James. Paul asserted that Greeks and Romans could become Christians without adhering to Jewish law, while the followers of Peter and James were more likely to keep kosher and abide by most or all of the other details of the Law of Moses. The exact degree of difference between these early schools of Christian thought is uncertain, though, because the more Jewish form of Christianity faded out over time and left little documentary evidence. The many varieties of Christianity extant today are all descendants of Paul’s more gentile Christianity.
Parts of Tabor’s analysis emphasize a much greater difference between gentile Christianity and Jewish Christianity than many biblical scholars would be willing to support. Here one must acknowledge that the documentary evidence is quite thin, and that some of Tabor’s positions, though feasible, may be based more on reading between the lines of scripture than on what the documents plainly say. In Tabor’s view, Paul actually saw his own understanding of Christianity as superior to that of Peter and James because Paul had direct communication with the heavenly Jesus. The writers of the four gospels of the New Testament were influenced by Paul and Paul’s followers, and thus understated the starkness of the difference between Paul’s gentile Christianity and the more Jewish form of Christianity taught by Peter and James, and presumably by the earthly Jesus. Paul saw in the death and resurrection of Jesus a pattern that he felt was about to be applied to all humans who were worthy. The righteous were soon to be converted from flesh and blood into beings of spirit, beings who had bodies, but bodies that were  glorified and incorruptible. These would be part of the new Kingdom of God. Paul expected the heavenly Jesus to return to earth at any moment to usher in this next phase of history.
Barring the unexpected discovery of some unknown and indisputable manuscripts from the first century, it is unlikely that Tabor’s more unusual claims will ever be broadly accepted or firmly disproved. Rather, they will remain one of the many and often conflicting interpretations that well informed scholars can develop from the limited evidence that is available.
Paul and Jesus: How the Apostle Transformed Christianity, by James D. Tabor. Simon & Schuster (2013). ISBN: 978-1439123324.
~Jim Dugan