Keeping It Between The Goalposts 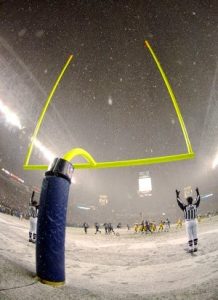 Fifteen years…
Chances are that not many would have given a small band of atheists with a liberal social agenda much hope to last very long as a functioning organization in a city with a strong, 300 year-old Catholic tradition, or in a state situated nearly in the center of the Protestant Bible Belt spanning the southern United States. This would have to have been a pipe dream that wafted away quicker than the pungent smoke they were sharing, right?
Well, wrong.  The hypothetical skeptic would have passed over a deeper look at the message that served as the core principle of the organization, and negligently underestimated the dedication and, quite frankly, chutzpah of founding father Harry Greenberger and the devoted brothers and sisters around him at the beginning. Had the agenda been specious or the organizers easily discouraged, the prognosis of failure would have been correct, but the combination of leadership and purpose made success a fait accompli—nearly everything was right for this marriage made in…well…New Orleans.
The one-two combination of people and purpose, directors with a directive: what a concept. The symmetry is elegant, but at the same time can be insidiously satisfying—an End, a state of zero energy, motionless poetry. It need not be, and there seems to be no one involved with the group ready to relax on past positives….and counting.

Let’s borrow from that dualism, that two-tiered approach which got us to this point in our history and apply it to a model for reevaluating the motivations and goals of the organization and how best  to proceed in implementing  its chartered mission and approaching other “issues”.
The work is on two fronts: the promotion of the Humanist ideology, which is based on our local chapter’s Statement of Principles, Humanist Manifestos I, II, and III, along with general regulations and by-laws that are in place pertaining to our unique group, including outlines of decorum in public or participating in open or closed social media discussions. The objective is recruiting new members; the method is education through public or private broadcasting (television and radio), news outlets (newspapers, print and online), social media postings, personal blogs, printed handouts, appearances at social gatherings and participation in community voluntarism.
That in itself would be enough to keep even the more industrious of any group knee-deep (at least) with projects and activity, but there is that second pier of responsibility that must be engaged if the first standard of purpose is to have any hope of maturing and manifesting itself in the future.
There is a justifiable and growing concern that religious fundamentalist interests are gaining a widening sphere of influence and the gains in political power that can come with it. This is the metaphorical second pillar of our self-justification, our raison d’être. This is the dirty part of our job, the negative part, the part that has to do with challenging and opposing bad ideas. This is where we must “just say no” to proposals for mean-spirited restrictions on basic human rights, and when it is the part of our job to expose the danger of an irrational fear of science and the fallacy of placing unflagging reliance for guidance on patriarchal documents and credos from cruder times. This is may be the harder part. Hard, but doable.
While IRS regulations prohibit non-profit 501(c)(3) organizations from endorsing (or opposing), or contributing to, or working for particular candidates; there remains a certain flexibility that is allowed when it comes to lobbying for or against legislation. We can likewise have allies at the national level that are assuming the principle leadership role given their larger funding bases. The Bill of Rights in our Constitution has served us well generally, but some of the loose and vague provisos therein can and have been interpreted by biased judicial bodies unsatisfactorily. There has been a spate of unfavorable decisions lately on corporate “personhood” in matters of religious and campaign liberties, but at the same time more favorable decisions concerning opening marriage rights to everyone.
It has been said that the particular faith maintained at the base of Christianity is problematic in the sense that that it is “not only faith beyond reason, but, if need be, faith against reason” (1). The same evaluation would apply to Islam. This is an unacceptable. Our values, expressed in Manifestos or privately held, must include a call for an serious condemnation of fundamentalist religion, at least those based on savage and authoritarian texts, whether that condemnation be through civil debates, public outrage, mockery, or rude disrespect, as long as it is directed to the idea, not the person, in any available format or setting and at any opportunity. Calls for religious pluralism and tolerance must be cross-examined and disregarded if they offer no solutions for the likelihood  that  some of their own are destined to assume prophet status and create an interpretation of the truth based on a novel reading of what is basically a mythology.
Together, we can do this.
Happy Anniversary, NOSHA!
Happy Holidays, Y’all!
~Marty Bankson
November 30, 2014
1. Barrett, William, Irrational Man (New York: Anchor Book Edition, 1990), p. 92.