Capitol Day for Freethinkers… What a Concept! 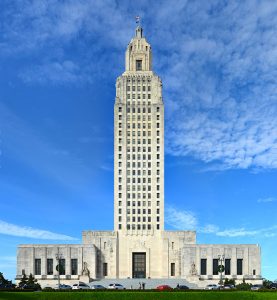 With symbolic baby steps, Louisiana atheist and secular groups entered the Louisiana Capitol on June 7 and set up information tables in the northwest corner of the marble-and mural-embellished Memorial Hall.

Those modest first steps may have resonated more than the nonstop shoe clatter of legislators, pages, and other government groupies scuttling across the buffed stone floors of the grand hall of the building. For the first time, an organized presence of openly anti-religious citizens staked a claim to owning a part of the legislative process, a right to be seen and heard in the people’s house, which until now was the default divine province of fundamentalist Protestant lobbyists and Catholic archbishops.

Although on this day there was going to be no legislation proposed, no lobbying undertaken, or speeches made, secular Louisiana made another small inroad into the consciousnesses of Louisianalegislators, baby stepping. Previous appearances by Jim Dugan at Senate Education Committee hearings on the humorously-named Louisiana Science and Education Act may gave been the first efforts to give a meaningful voice to the secularist viewpoint against religious influence on public policy. At this day’s event, we emerged from the relative obscurity of committee chambers and parked it frontand- center, in the company of the 10-foot white marble statue of Jean Baptiste Le Moyne Bienville, founder of New Orleans.

Through a common Facebook page several Louisiana Atheist groups share, the group was able to get representatives from Alexandria Freethinkers, Winn Parish, and the recently re-organized Baton Rouge Freethinkers (formerly Capital Area Atheists and Agnostics) to join in with the NOSHA representatives from our group to offer information and handouts, and, from the Alexandriagroup, devilishly tempting packs of Skittles. Several small placards and one poster-sized sign implored passers-by to ASK AN ATHEIST. 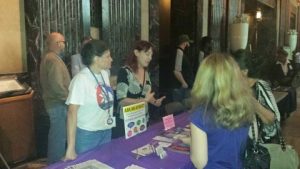 The event drew a moderate number of questioners, which, given the budgetary crisis that was in need of being resolved by Thursday, left legislative types little time for much else, should be considered a success. A snapshot of a typical visitor was someone who “just stopped to see what it is all about”…with the “it” being atheism, and the “about” being what the implications are beyond basic non-belief, namely in this statehouse. Several with this line of questioning seemed to be nervously glancing about to see if he was being observed. A few even said they were open minded. Yes!
Activities like Capitol Day, attending legislative sessions, speaking up at committee hearings, and any form of government petitioning are all, by themselves, small steps, but are cumulative and essential to gain more attention and respect if we are serious about affecting positive, beneficial legislation for all citizens, and countering the regressive influence of the religious lobby. So thanks to all who share this commitment and were able to take the time to come. 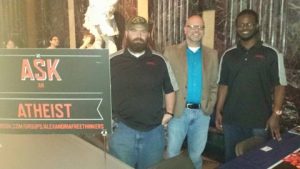