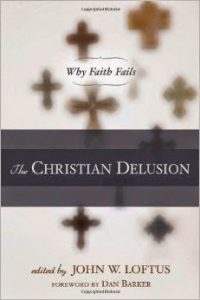 
John W. Loftus has given us a number of volumes, most famously his monograph Why I Became an Atheist : A Former Preacher Rejects Christianity. Continuing the themes and arguments from that work, Loftus gathered a group of writers from different disciplines to expand on or respond to topics such as the relationship between Western society and Christianity, the psychology of religion, the relationship between world-view and reason, the morality of the Judeo-Christian God, and the like. The result is an admirable edited volume, published in 2010 under the title The Christian Delusion: Why Faith Fails.

Each chapter of The Christian Delusion presents one writer’s perspective on a particular idea.  In The Cultures of Christianities, Anthropologist David Eller reminds us that Christianity is not a monolith, and that each variety of Christianity is intertwined with a particular culture.  Culture, for the most part, is something we absorb unconsciously, so changing it can be quite difficult.

“Christians are not easily reasoned out of religion,” he writes, “since they are not usually reasoned into it.  Christians, like other religionists, are not so much convinced by arguments and proofs as colonized by assumptions and premises” (p. 44).

In Christian Belief Through the Lens of Cognitive Science, psychologist Valerie Tarico asks secularists to better understand religious believers in light of the fact that our shared human nature is to be irrational. She points out that “certainty is a feeling, not proof of knowing,” and that “the structure of thought itself predisposes us to religious thinking” (48). It is worth repeating the adage that the scientific method is “what we know about how not to fool ourselves.” Each of the thirteen other chapters offers its own particular perspective on similar themes.

For me, the last section of the book, dealing with Christianity and society, was the most interesting.  Anthropologist David Eller argues that Christianity Does Not Provide the Basis for Morality, while Hector Avalos, a child evangelist who became an atheist academician, clarifies that Atheism was Not the Cause of the Holocaust.  Historian Richard Carrier deftly demonstrates that Christianity Was Not Responsible for Modern Science.  To many secularists it might seem that these positions are too obvious to need argumentation. Sadly, that is not the case. Creationists and other Christian apologists repeatedly make exactly these claims, and that is one of the main reasons a volume such is this is so necessary.