Hudkins’ Response to Greenberger Humanist of the Year Award 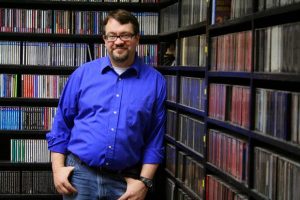 This photo of Hudkins was featured in the Times-Picayune
by Dave Walker on December 9, 2014. See article link below.

At our 15th year anniversary banquet in November 2014, we awarded Farrar Hudkins with our Greenberger Humanist Award. President Emeritus Harry Greenberger, for whom the award is named, read Hudkins’ statement of acceptance to the audience. We felt that everyone should be able to enjoy it whether you attended the banquet or not. It is a lovely note on which to end our year!

“I’m tremendously humbled, honored, and really amazed, by this award. My free time comes only a few hours at a stretch, and usually in the middle of night, and when I saw that NOSHA wanted to expand its viewing audience through the Internet, I happily volunteered to convert and upload “The New Orleans Humanist Perspective” programs to YouTube.

It was the perfect way for someone like me to volunteer – someone who is quiet and prefers to work behind-the-scenes. I don’t have much time or money, but I wanted to do something for a cause that I believe in very strongly: that is, the freedom to choose, without external pressures, one’s own way of thinking about life and our place in the universe as humans.

I value the Humanist Perspective program, and enjoy sharing it with people, because it defies the popular notion of atheists, as a group, marching in lock-step, waging war against all religious belief. It presents free-thinkers as simply human individuals, curious about the world around them, compassionate to other people … willing and eager to engage in polite, thoughtful discussion, about big and small ideas, with people of varied backgrounds and belief systems. I think it’s important to show other people that atheists and agnostics are as diverse as any other subset of humanity, and Harry’s program does that beautifully. It means so much to me that this award comes from an organization that I care deeply about, and that I have enjoyed watching grow and thrive over the years that I, in my very small way, have been involved.

I think it speaks volumes of the New Orleans Humanist community that you have chosen to honor someone like me, who works well out of public view, indeed almost anonymously. In a way, it reflects how humanists have worked for a long time: quietly, and not often in public view. But it is gratifying to see that changing – to see the Humanist causes coming into an ever-growing light, nationwide and worldwide.

I will continue to do what I can for NOSHA in the future – perhaps even more, once I’ve finished my long tenure as a working college student! You all have my deepest and sincerest gratitude. This is something I will cherish for the rest of my life. Thank you so much.”

The Times -Picayune did a feature story on Hudkins in early December.  Read it here.