BOOK REVIEW: Leaps of Faith: Science, Miracles, and the Search for Supernatural Consolation 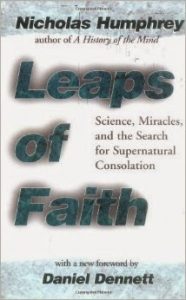 In Leaps of Faith: Science, Miracles, and the Search for Supernatural Consolation, psychology professor Nicholas Humphrey accomplishes a brief but thorough debunking of psychics, mediums, spoon-benders, and a whole host of supposedly paranormal phenomena. This is not a detailed examination of attempts to test and measure such phenomena, but a broad and philosophical view, pointing out the ridiculousness of the whole psychic show. Humphrey writes, “I think the search for the paranormal is all a big mistake. Sad to say, there has never yet been an authentic example of soul-power worth the name. The phenomena never pass muster. Their promoters always emerge with egg on their faces, with their hand in the till, or whatever other cliché suits the case” (p. 114).

The writing style is a bit chatty, and at first I worried this might become verbose. But his style quickly turned out to be disarming, as I found myself having picked up knowledge about theories of the paranormal without even realizing it was happening. This is easy reading that will make you think.

One key point is that people want to believe in psychic phenomena because they want to be able to reject materialism. They want to believe that the mind or spirit is something beyond the body, that the self can survive death, and that there is a realm of the spirit beyond matter and energy. As Humphrey puts it, they want “to get their souls back from science.” Psychic phenomena offer evidence, if not proof, that there is a great beyond. This also works in the opposite direction, as believing that mind or soul are some essence other than matter and energy all but  demands observable psychic phenomena. “Once a person has arrived at this dualist model of what it is to be a human being, it is certain to be a powerful enabler of paranormal belief across the board” (p. 195).

Another key point, and one I must confess I never thought of, is the perfect ridiculousness of the claims that are made about the supernatural. Humphrey asks us not to accept the hypotheses advanced by believers as the hypotheses that need to be tested. Instead, he asks us to step back and ask if the proposed hypotheses make any sense at all. If we think about it, we realize that the claims about supernatural suffer from “unwarranted design,” meaning they are too contrived and impractical to be credible. In other words, they are hopelessly theatrical.

I had to think about it for a while before I realized what a potent indictment of the supernatural this is. What possible usefulness is there in bending spoons, identifying photographs enclosed in an envelope, or guiding the gullible through past-life regressions? Would not people with any significant degree of such abilities enrich and empower themselves beyond ordinary people’s dreams? Imagine yourself a political candidate with the ability to know your opponent’s darkest secrets, or to win more often than lose at predicting stock or commodity futures, or to be able to unlock doors and safes with the power of the mind! The common paranormal claims are obvious rubbish compared to what at least some human beings would do if they had such powers.

In a few places, Humphrey overplays his hand. He attempts to define the paranormal as violating basic logic across the board, and here I think he is trapped by his own certainty in the materialist view of the universe. He is probably right in saying it is plainly irrational to imagine that someone could control the numbers that would result from a throw of dice, simply because of the detailed and precise forces that would have to be applied in the realm of the physical in order to accomplish such a feat. But if the paranormal phenomenon in question involves only communication between two minds, and if it is true that mind is a phenomenon of spirit rather than of matter and energy, then such reasoning could not be applied. Humphrey acknowledges that some experts would fault him on this point.

Overall, Leaps of Faith is well worth reading for anyone interested in beliefs about the supernatural.