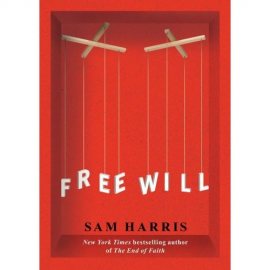 The latest from Sam Harris is Free Will, a title that is self-explanatory. From his perspective as a neuroscientist, Harris examines the latest evidence regarding free will, and considers some of its social and political implications. This book is quite short, serving mostly as an introduction to a complex question that still needs a great deal of work.

Harris’ key point is based on empirical tests. These show that the decisions we make moment by moment are registered in the brain slightly before we are consciously aware that we’ve made them. The conclusion drawn from this is that we make most of our decisions at some unconscious level. Our perception that we are consciously aware of and in control of our decision-making processes is a fiction that the conscious mind creates to explain what has already been completed in some hidden way. The conscious mind experiences more than it leads.

Harris cautions that this does not reduce human beings to mere automatons. We do have an ability to think reflectively and analytically, to apply reason and reach conclusions that are more or less defensible by logic and evidence. Yet the choice to invoke such reasoning is itself constrained by mental processes that are inscrutable to the conscious mind. Harris begins here to develop a fascinating idea about “the choice to choose,” but doesn’t go far enough in defining it, and this is probably the book’s most serious weakness.

The implications of unconscious control run deep. For one thing, Harris feels it makes the question of a soul irrelevant. Whether there is a soul of spirit, or we are entirely made of matter and energy, the fact that our will exists more unconsciously than consciously radically alters our understanding of ethical and criminal responsibility. It shifts responsibility for many problems away from the individual and more toward society as a whole, generally undermining the “conservative” world-view that emphasizes rugged individualism, and pushing more toward a “liberal” and social perspective.

Free Will by Sam Harris was published in 2012 by Free Press, ISBN 978-1451683400, 96 pages, available in paperback and Ebook editions. Sam Harris has also authored The End of Faith, Letter to a Christian Nation, and The Moral Landscape.