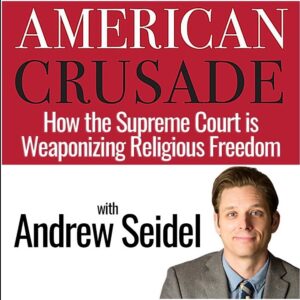 Seidel points out how “the Constitution envisioned religious freedom as a protection for minorities, not a weapon to maintain privilege.” He highlights the most important cases to show how our society has become more and more diverse, while the pushback from the Supreme Court is to reassert Christian privilege and alleged superiority.  In case after case, Supreme Court justices have used “hostility toward Christians” to rule in favor of Christians and to maintain their privilege. Justices often totally ignore hostility towards non-Christians and Christians who interpret the bible differently.

Seidel quotes Martin R. Castro, Chairman of the US Commission on Civil Rights, who said in September 2016, “The phrases “religious liberty” and “religious freedom” will stand for nothing except hypocrisy so long as they remain code words for discrimination, intolerance, racism, sexism, homophobia, Islamophobia, Christian supremacy, or any form of intolerance.”

This is exactly what Christians bringing cases to the Supreme Court want — a validation and exemption of their religion-validated bigotry.