The route back through the historical turns that eventually led to the corruption of the Chrisian message of charity would surely be staked with signposts marked Exit Here>Hubris, Greed, and Folly. I’m not going there, but promise to honk when I pass. 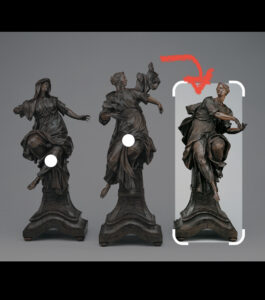 First, then, The Great Depression, when millions in the United States and elsewhere were out of work in an economic system that was supposed to award hard-working citizens a stable and comfortable life. But it wasn’t working that way.

By the mid-1930’s the New Deal was ramping up, and with it, the rhetoric aimed against “The Social Gospel.”

Congregational minister James Fifield  decided to go on offense against the socialist surge by staffing the pulpits and flooding the radio waves with this interpretation of Jesus’ true message:  business has a friend in Jesus, and government is the enemy of God and man.. The welfare state violated several of the Ten Commandments, but especially the Eighth [Thou shall not steal].” writes Katherine Stewart in The Power Worshippers.

The underlying message, was that public assistance was the domain of the church, not the state. The objections to this theory should be obvious, but then there is this twist on the theme.

Utah is the best example of church-state intermingling, having been founded by a population of settlers mostly belonging to a sect of Christianity, Church of Jesus Christ of Latter Day Saints. At about the same time Rev. Fifield was in an anti-state welfare crusade back East, Morman church leaders had also decided public assistance from the government was ill-advised, and voted into policy a unique system of city and county (Salt Lake City/County) welfare distribution which was to be funded and operated by the LDS church. A large physical plant called Welfare Square was built to handle the volume of cash-strapped Utahans, the centerpiece of which is a towering silo. 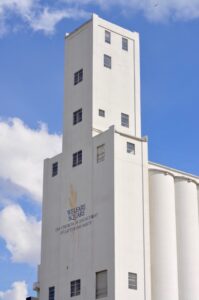 A report by ProPublica (from which this report is taken) that the state government has been able to save tens of millions of dollars contributing to programs of assistance required by the feds to qualify for federal money through Temporary Assistance for Needy Families (TANF), by  counting as its own what the church LDS had actually spent. Specifically, Utah has been able to get out of spending “at least $75 million over the past decade on fighting poverty it otherwise would have had to spend under federal law.” The feds are apparently good with Utah’s accounting methods, which includes counting volunteer hours worked at Welfare Square as state contributions.

They  may not, however,  be good with the story of one applicant for assistance from the church’s Welfare Square, but there is not much to be done about how a church spends its money. A group of Mormons showed up at the infirm applicant Danielle Bellamy’s home and there “have her read out loud from the faith’s signature scripture, the Book of Mormon, watch Latter-day Saint videos and set a date to get baptized, all of which she says the church was requiring her to do in exchange for giving her food.” She ultimately passed on the petty extortion arrangement on principle, and was denied help.

Just my opinion, but I would estimate that this sort of quid pro quo propositioning is common practice among religious charities.

Getting Finances in Order

The Good Men Project recently summarized a report by Lake Institute on Faith and Giving and The National Study of Congregation’s Economic Practices (NSCEP). In 2017, a study documented how churches receive, manage, and spend their money.

According to the study, churches received $124 billion in donations in 2017, ranging from $3,000 to $41,000,000 per congregation, 81% of which came from individual donors. It alson showed (surprise, surprise) that the more the churches “teach about giving, the more likely to see an increase in donations.

Almost 50% of that cash is spent on salaries and wages. Another 23% is spent on building construction and maintenance. Missions (spreading the message), programs, and dues account for the remaining 27% available. Charity and assistance would be a part of that amount.

The folks at the Good Men Project presume that this is not the financial model  Jesus would have intended his followers copy; or any religion, for that matter, properly following the theological virtues of faith, hope, and charity.  The author of the article suggests a “new approach” to church:

“The church that I attend meets in the humble home of one of our members. We gather each week around their table and share a simple meal together where we intentionally remember Jesus. We catch up. We share our joys and struggles. We encourage each other and keep each other accountable. We pray and give. We do all of this without paying a person to lead it. When our church takes up offerings, 100% of the money it given back to bless and help needy and hurting people.

This model of church is reproducible, relocatable, virtually free to run and, to be honest, much more enjoyable and life-giving than anything I’ve ever experienced in the institutionalized church.”

He admits a criticism of this way of worship is that with no one with theological training and expertise leading the service, it would be open to false teaching and heresy. But I see a catch-22 in this radical arrangement of worship services.  Rather than have that extra $90 billion saved on wages and buildings to spend on helping those in need, that without the pomp and circumstance, the fiery oratory and slick rhetoric of the preacher-person, or without the (often) grandeur of ornate halls of worship and the spectacle of ceremony, that money  would just not be there. There is no bang for the buck sitting around the kitchen table, when  a world  of entertainment and extravaganza dominate the senses night and day. The net take on funds available for charitable work would be less than what the current model provides, by far.

So good luck with that, Good Men.