Just One Thing for Christmas

Here’s an idea for a new Christmas Twilight Zone episode were the program to be revived, if you will indulge me: imagine, during this season of giving, what might be the best gift the non-theist secular community could receive from the conservative Christian community. To be sure, spending much time ranking a wishlist like that would  be time wasted, since offering an olive branch of peace,  much less anything like a gift from the latter is an adventure into the imagination’s hinterland. But this: how could the  implementation of an idea for a change in the way they—American and other Western nations’ conservative Christians— live out their faith, both personally and in social settings?

Baton Rouge native and author, journalist, “traditional” Christian spokesman, and political advocate tries to make the case that the truly faithful should follow 6th Century hermit and abbot lead by going into exile from today’s spirit-killing apocalypse we call modern secularism. The signs of demise of Christianity are everywhere, he tells us, “hostile secular nihilism has won the day in our nation’s government, and the culture has turned powerfully against traditional Christians.”

Benedict of Nursia, from a privileged family near Rome, came of age and took up residence in Rome in the 6th Century,  a period when its  grandeur had passed, and the Visogoths had rendered Rome a slumping shadow of its former self. Disheartened, and sure that the loss of faith in Christianity had been a direct cause of the tragic waste, decided he would  go in search and reaffirmation of his own faith.  To do so, he would need to escape from society, so he found a cave and moved in, for three years. He finally came out of the cave but remained in the cloistered monk business, serving as abbott and, rumor (Wikipedia) has it, was the subject of plots to poison him, first by fellow monks at the monastery, then later by an associate of his when he moved back to his cave. 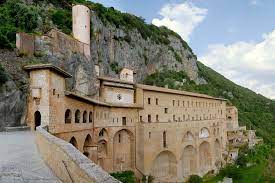 The Benedict Monastery at Subiaco

The idea advanced in The Benedict Option, Dreher’s 2018 book, is for the truly dedicated and faithful Christian  to either physically or mentally and socially separate their self  from the flood of perdition and debauchery of the day, get to a place of solitude, and contemplate their faith as they understand it in its its essence (or navel, whichever the case may be.) Worry no more about spatting with acquaintances; no more politics. If you can’t break out of relations with family and property, or can’t bring yourself to bunking with your fellow faithful in a monastery, or your physical condition just isn’t robust enough to tolerate cave dwelling , you must “exile in place” —right there in that beachfront condo, or your gated, bedroom community subdivision, or  farmhouse on rural County Road 1158: just wherever you now call home. 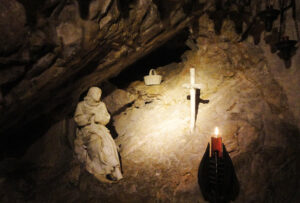 “Christian conservatives could no longer live business-as-usual lives in America…we have to develop creative, communal solutions to help us hold on to our faith and our values in a world growing ever more hostile to them.“In this book,” Dreher writes, “you will meet men and women who are today’s Benedicts. Some live in the countryside. Others live in the city. Still others make their homes in the suburbs. All of them are faithful orthodox Christians—that is, theological conservatives within the three main branches of historic Christianity—”

This idea of nurturing one’s faith and preserving Christianity by large numbers of true believers  retreating from society is pretty much a non-starter, and I’m sure Dreher knows it (he is not taking his own advice). Those dedicated enough to this monastic lifestyle are mostly already doing it, either individually and invisibly, or in quirky cults. Dreher recognizes the decreasing numbers of folks identifying as religious and Christian over the decades, so what benefit will this cockamamie exodus of faithful offer?

And surely we, as secularists, know that the aggressive, well-funded and well-organized religious right is not going anywhere soon, and any hope of life without hearing about Christian persecution, or the total and complete tanking of the godless Western liberal democratic society ….will become hope deferred, along with any gift we fantasized about as a theme in the article, but—who knows, when the time arrives, may even come dressed with a bow, with a greeting card proclaiming they have finally understood their Christ’s message of loving of one’s neighbor “as thy self”—all of one’s neighbors.

Happy Holidays from the Folks at NOSHA!