Animism and Monotheism in Mali as Microcosm 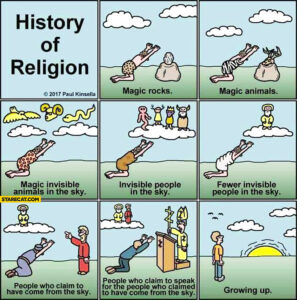 When American atheists think about religion, I imagine we are usually thinking about monotheism and its influence on the world we live in. We are not usually thinking about animism, or paganism, or whatever other term we might use to describe pre-monotheistic thought and practices. Those ancient cultures were obliterated by the extreme hostility of the monotheistic religions, and that all happened a long time ago.

At least, it happened a long time ago in Europe and North America. The war between monotheism and animism is still going strong in Africa, and animism is holding its own. As a result, I have spent more time thinking and learning about animist beliefs and practices, and their relationship to monotheism, than I ever have when I am in the United States. This has been good for me, I think, and I think it would be good for atheists to consider, because the history shows that monotheism does not and never has, in fact, obliterated animist beliefs and practices. It destroys their respectability and prestige. It drives them underground, where they re-cast themselves in new forms that are hard to see. But it does not destroy them.
One of the things I notice about African animism is that it is inclusive, not exclusive. This is the basis of the village assessment that says the village is 80% Muslim, 20% Christian, and 100% animist. If new ideas are powerful, animism is capable of adding them to its belief system. This is a pragmatic, reality-based approach to life that I cannot argue with. 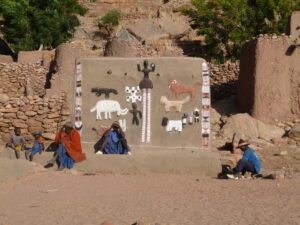 Animist art alongside the Binou shrine in the Dogon Valley, Mali

Another thing I notice is that animism is not nearly as judgmental or vindictive as the monotheistic religions. Although there is a clear social code of ethics, I do not hear any obsession with sin. I hear no talk of heaven or hell, Judgment Day, eternal damnation, etc. At the very least, this makes animism easier to live with than Christianity.
The Christian missionaries continue their war on animism here, although without the success they enjoyed in Europe, North America, and to a lesser extent, the regions of the Spanish and Portuguese empires in Latin America. I can see that animism/paganism have deep roots in the human psyche, and it makes me wonder how thoroughly Christianity was actually able to eradicate pagan/animist beliefs and practices in Europe and later, in North America.
Of course, we all know that the Christmas tree, the Easter egg, Halloween, witches, werewolves, everything in the Grimm Brothers fairy tales, leprechauns and zombies are all survivals of pagan or animist traditions in popular culture. I suspect, though, that these well-known examples just represent the tip of a very large iceberg. The hostility of Christianity towards paganism or animism in the medieval era has been replaced in the modern era by the war of science against superstition. But science has not eradicated superstition any more than Christianity has eradicated paganism. It has driven it underground, where it adapts, changes its appearance and re-emerges as Qanon or UFO obsession, even systems to choose winning lottery numbers or “read” slot machines (denying the law of averages). And I haven’t even begun to sort out the New Age stuff.
Part of the problem is that Christianity, more than a thousand years ago, made compromises with pagan/animist beliefs. On the one hand, Christianity demonized these beliefs and the people who held them. On the other hand, they allowed people to adhere to those beliefs as long as they presented them in a Christian form that acknowledged the temporal power of Christianity. This compromise began a long tradition of hypocrisy whereby people hold two contradictory beliefs simultaneously, which they can only do by not thinking too deeply about either one of them. So, while in pre-Christian Greece Socrates could say that the unexamined life is not worth living, in Christian European society the unexamined life became mandatory.
I am sure we would like to think that the Enlightenment fixed these problems once and for all, and paved the way for the Age of Reason, but we have had too much experience in the 20th century to be so naive. I think part of the problem today is that we have a jumble of belief systems, assumptions, and aspirations, which we have never confronted honestly and systematically. We don’t understand the enduring appeal of pagan/animist beliefs, assumptions and aspirations. We don’t even have a clear idea of what science and reason are. 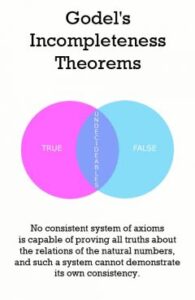 The Problem with Mathematics

At the same time, we are all heirs to the tradition of holding contradictory, unexamined beliefs, and we may be continuing that tradition without realizing it.

I expect American atheists universally to describe themselves as pro-science. I expect us to believe that we are basing our worldview on science, and that we are trying our best to be rational and to base our ideas on evidence (as understood by science). And I expect American atheists to understand that science is evolutionary, not revelatory, and that we know things according to the current state of science, and we understand that new discoveries may make us change our understanding. 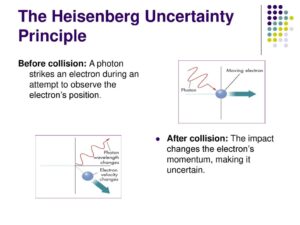 Uncertainty at the Smallest Scale of Naturalism

Unfortunately, we are not all subscribed to every science newsletter that would keep us up to date on every new discovery. It’s possible that we are holding to certain beliefs that used to be the current state of science, but have since been discarded. And on a larger scale, science itself has had to confront certain legacies of its own past, especially the legacies of the 19th century, when rapid advance in the physical sciences led to a kind of scientific hubris, and the  assumption that we could approach the social sciences in the same way. We are still grappling, and not very well, with the legacy of positivism.
Positivism was the assumption that we could repeat the great successes of research and discovery of the physical world when we turned our attention to the social world of human society. Positivism assumed that the progress of science and technology was all good and all progressive. Positivism assumed that everything modern was good and everything traditional was backward, ignorant, superstitious, to be consigned to the scrapheap of history as soon as possible. This led directly to the genocide of Native American/First Nations culture in Canada and the United States, and the chronic suppression of indigenous culture in Latin America.
The relationship of the modern to the traditional is something we are still trying to work out. Understanding the complexities of the physical world is child’s play compared to understanding the human world. Understanding the complexities of an individual human’s needs is daunting, much less trying to understand the complexities of social needs. It is not enough to wipe out the traditional and replace it with the modern. On the other hand, it is foolish to think that it is possible to cling to the traditional and reject the modern.
How has so much of the traditional managed to survive in the modern world? Why has the modern not only failed to keep its glittering promises, but has often
become a nightmare of confused violence instead of a paradise of reason and humanism? How can we realistically and honestly evaluate our own culture and the culture of others very different from ourselves? These are the issues I am confronted with when I live in a world as different from my own as Mali.
–Robert Wilfong, July, 2021