One of the great advantages of traveling to a different world (such as Mali) is the opportunity for obtaining the parallax view, the perspective on your own culture that you can never get from inside that culture, especially such a self-contained bubble as America.

As an atheist in a country much more actually religious than the United States, I am forced to confront many things I would not even see in the United States. I have to think deeply about the very nature of religious belief and practice, and the ways religion fits and doesn’t fit, in the modern world. 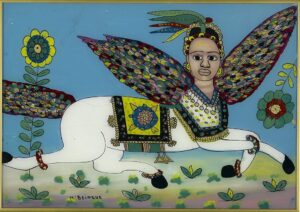 There is an old joke about the Christian missionary in a West African village. The old missionary is retiring and returning to Louisiana (I actually met a missionary from Natchitoches in a village here a few years ago). His replacement wants to get oriented and asks the retiring missionary to describe the religious composition of the village.

I told that joke to a Malian friend, and he reacted with something akin to disgust, but not exactly.

“That is so true, it’s not even funny,” he said. “It’s not even a joke. They can pray five times a day, go to the mosque on Friday and observe all the sacrifices and ceremonies. They can go to church on Sunday, confession or whatever, donate to the church, do all the things they need to in order to be a good Christian.”

“But as soon as there is trouble in the family- sickness, money troubles, disputes that are not easily resolved- they go first to the marabout and then to the sacred grove. They consult the diviners and then make sacrifices. And they see no contradiction in this.”

Of course, the Christian (Protestant) missionaries see a contradiction, as well as the Catholic priests. The attitude of the Muslim imams, on the other hand, seems much more complicated. The history of Christianity and Islam is full of official hostility to animism, in Europe as well as Africa, but quiet, even unspoken compromises with a mentality that is much deeper rooted than their upstart cults. Since the imams have had to deal with animism far longer than the Christian missionaries in Africa have had to do, they have long since made their peace with traditional beliefs and practices.

Here is an example. It is common to see children under the age of five wearing bracelets with a flat leather pouch about 1.5 inches square. I have seen toddlers with such a pouch on both arms and both legs. These are called gris-gris, and it seems to be the same term as the New Orleans gris-gris.¹

Of course, I wonder what is inside the pouch. When I ask I am told it is a folded piece of paper containing a koranic verse, which the imam or marabout has written as a charm to ward off sickness or other evils. Fascinating.

I also have a good friend in the village I am connected to, Kirina, who is a marabout, a diviner and traditional healer using plant-based medicines. But he regularly goes to the city to study with an Islamic teacher, and he is on good terms with the village imam. What does it all mean? I don’t know.

Here is another example: alcohol. Even though this is a majority Muslim nation and there is no open principle of separation of church and state, there is a lot of drinking going on here. Alcohol is sold in most gas stations (which are everywhere) and many depots de boisson (wholesale beverage dealers, both alcoholic and non-. There are lots of bars, located in quiet, out of the way places not too close to schools, mosques or hospitals. Drinking is very popular, and most of the people who are doing it are ostensibly Muslim.

Or, as my good friend Seydou says, modern Muslims. He prays five times a day, tries to live by the ethical precepts of Islam, and observes all the holidays, including the fast month of Ramadan, but he does not go to the mosque and he drinks beer, in bars, on a regular basis, or as regular as his expenses allow. There are many people like Seydou in the cities of West Africa.