An Hour or Two with Harry 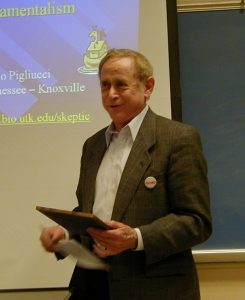 Harry Greenberger in 2001 at Darwin Day.

Born Free in Okeechobee
When the first question came up during my discussion with Harry Greenberger, a quotation came to mind: “Everyone starts out being an atheist.” It turns out to be the words of the sage, but sardonic curmudgeon-commentator, Andy Rooney who appeared regularly on CBS’s “60 Minutes”. Harry has earned the “sage” moniker, stating that he was always an atheist, in but contrast to Rooney’s crabby presentation of wisdom, the octogenarian Greenberger’s bonhomie and easy demeanor is as smooth as the Southern gentry of days past.
Humanist Advocate (HA): You related to me earlier that you were Jewish. Can you tell me a little about your childhood. e. g.— did you grow up in a strict religious home, or were your parents secular? Did you ever experience any overt or covert acts of prejudice because of your Jewish origins?

Harry Greenberger (HG): I lived in Okeechobee, Florida, which is a very small town in south Florida with my two older brothers, a sister, and parents, who had moved there from New York City, by way of Amarillo, Texas. There were from time to time maybe three Jewish families, but there was never a temple or synagogue where I grew up. My father had become a Christian Scientist, and the town was so small there were no Christian Science churches either. I’m convinced my mother was an atheist, but the subject never came up. We didn’t even talk about it. So I didn’t get any indoctrination as a Jew or Christian Scientist.

There were four children, and my parents didn’t try to force things, except by example. And by example I mean, as people in the South, they treated black people very well and were very liberal. My mother and father ran a little store in Okeechobee, and the children were raised by a black maid. I had no idea there were any problems between the races, except that blacks lived in one part of town and we lived in another. You asked earlier if I ever experienced any prejudice for being Jewish and we did not. No one was aware of those religious differences—we were just accepted as a part of the community. In school, we would recite the Lord’s Prayer every day, did readings from the New Testament, but I didn’t see anything to it, and we just did it. I was in a Christmas pageant play, and played the role of one of the wise men. But I didn’t know I shouldn’t have been doing that as a Jew.

Okeechobee High School, Class of ’44 Valedictorian, Harry then received a Bachelor’s degree, with Honors from the University of Florida, passed the Florida CPA examination and moved on to Florida State University, where he was an accounting professor’s assistant and earned a master’s degree in psychology. Soon after, he and a friend decided to move to New Orleans. After a career in accounting and a partner in the ownership of a French Quarter art gallery, Harry was ready to get involved with a group that had like-minded secular, non-theistic opinions.
Getting Started
“So, the man sitting next to me said, ‘How about this man?’ pointing to me.’”
HA: Did you consider yourself a little courageous or at least adventurous for getting involved with an atheist organization given the preponderance of Catholic influence in the city? 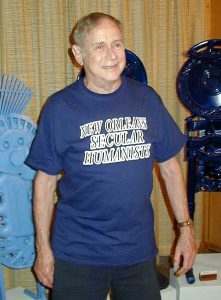 HG: When the small group started NOSHA, I was retired by then. If not, I might not have been able to go public because it could influence people I worked with and also customers of our business. I was retired, so I didn’t have that restriction. When the article appeared [about the new group] in the Times-Picayune, which was a lengthy article about me and our atheism, I had friends who said “You’re going to be in trouble. People are going to break windows in your house and spray paint your car”. I had no problem, not a single instance, ugly phone calls, any problem. I think maybe people of New Orleans have enough of a varied background that they can accept people who are different.

HA: Tell me something about the early days, some of the background of getting started up.
HG:  Many years ago I got a notice that a group was forming an American Atheists group. It was kind of a small, ragtag group and I decided it was going nowhere; and it didn’t. Some years later, there was a meeting at the Unitarian Universalist Church, and in this case there were two people who came in from the Council for Secular Humanism—I think that’s where they were from—and talked about setting up a group. I had the feeling at the time that that group was not going to develop either. And it hung around a little while and went by the wayside.
My third invitation to become a part of a secular group was the one at which NOSHA was formed. There was a meeting of about a dozen people at a bookstore in Metairie and I was impressed that these people were of a good background and this would be a successful group. None of us knew each other. The woman who had arranged for this had contacted the Council for Secular Humanism to ask if there was a local branch, and they told her there was not, but that she could start one. She said she did not want to be the president; but she wanted a place where her young children could go because they wouldn’t be going to church or Sunday School; but she had to keep a low profile to avoid professional or social repercussions.
She had all the materials that showed how you set up an organization, and she said “…this is how you set up an organization—the first thing you do is elect a President.” So the man sitting next to me said “How about this man?” pointing to me. And I said to them “If anyone else would like to do it, please take it; if not, I’ll do it”
I felt like this group really had a chance for survival, because of what I perceived as the quality of the members. Three of those on the Board of Directors were college professors, Dave Schultz being one who is still with us on the board. I was never one of those “in-your-face” atheists, and I think we had a refined group on the board of directors.
Organization Man
HA: Had you any experience setting up a non-profit organization or was your career work helpful?
HG: Absolutely. At that meeting, we talked about getting organized, and I told them that I was a CPA, and had some experience in organization. As one of the owners of Nahan Art Gallery on Royal Street, I had called for a meeting of the Royal Street merchants to set up an organization to be called the Royal Street Association, because we had top quality art galleries, antiques stores, first class restaurants on the street that I thought we would benefit from being an organized entity. I called for a meeting to start the association. We had another store on Chartres Street, and when the Chartres Streetpeople saw what we were doing they formed the Chartres Street Association and I served on their Board of Directors. I was the President of the Royal Street organization as well.

Come World’s Fair time, streets were under construction and killing business. Royal, Chartres, and Bourbon Streetgroups met with the Mayor and his aides to discuss problems, and a woman said “…what we need is a French Quarter Business Association and Harry Greenberger should be the president.” I became the President of another new organization. It was because of my presidencies that I got to know everybody on the New Orleans City Council, because we would go there with problems and complaints, and they all knew me.

Also, I represented our company at the Chamber of Commerce, and I was really pissed off because they just ignored the French Quarter. I arranged to talk at the meeting of their board and made the point that needed to pay more attention to the FQ because of the tourist business it brought. So they set up a French Quarter committee and made me the chairman, so that’s another one that I had to put together.

HA: You have given a secular invocation at the start of eight City Council meetings. Was it your familiarity with the council members that helped you to get your foot in door to do this?
HG: Councilman Marlin Gusman, and I do not remember what brought it on, approached me with the proposal that if I wished to give a secular invocation at a meeting, he would set it up for me.
And I did. That is how I got to know the city council’s chaplain, who usually gave the invocation. After a few months or year passed and I called him and said I would like to do another one. Since he found out I was not insulting religious people, I was just doing my thing, and any time I wanted to do one, I would just call him and he would fit me into the agenda.
HA: You also write the material and host a variety of guests from many walks of life on “The Humanist Perspective”, a locally produced cable TV program. How long have you done this, and did the idea for that come after NOSHA got off and running? 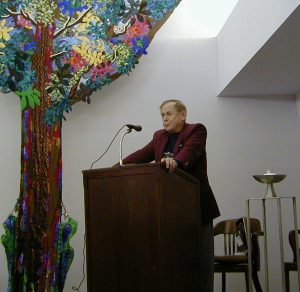 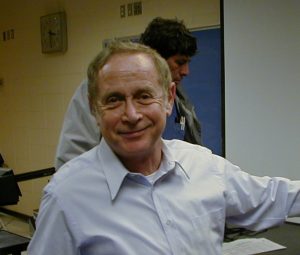 In addition to scheduling over a hundred speakers for monthly NOSHA meetings during his time as President of NOSHA and interviewing hundreds more on “The Humanist Perspective” television program, here are some other noteworthy events, publications, and awards Harry has had a hand in:

2002—Interviewed by Elizabeth Mullener for the Times-Picayune
2005—Acknowledgement and photograph of the Mayoral Proclamation of “Day of Reason” in New Orleans requested by members of NOSHA published in Freedom from Religion Foundation publication, Freethought Today
2009—Recognition of New Orleans CityCouncil Proclamation of “Day of Reason”  in Free Mind. Both proclamations were proposed as alternatives to the National Day of Prayer.
2012—Interviewed by Eric Nguyen of the Humanist News Network, the weekly online publication of the American Humanist Association.
2012—Recipient of The Humanist Award of NOSHA. The award was later given his name.
2013—Designated as President Emeritus of NOSHA
2014—Named to the Honor Roll of the Humanist Foundation, a subsidiary of the American Humanist Association.
2014—Published an essay in Free Inquiry, the magazine of the Council of Secular Humanism, addressing the theme “The Faith I Left Behind”. His essay, “Why I am Not a Believer,” was one of several, out of the hundreds submitted, to be selected for publication in the book The Faith I Left Behind.