A Dangerous Kind of Good: Adventures on the Northshore 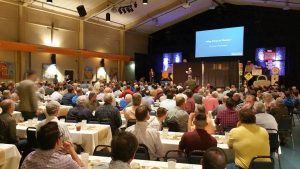 On Thursday night March 12, John Stringer and Clint Crain became “part-time” ambassadors for the NOSHA crowd as they accepted an invitation from a Northshore church to attend a dinner event that was proposed as an opportunity to have some dialogue with non-believers in the community. These are their stories:

John Stringer
I and one other member of NOSHA attended the “Why Does It Matter” Men’s Dinner at St. Timothy on the North Shore Methodists Church. The speaker Stuart McAllister was your basic Glasgow Scotland thug who found Jesus after dating a Christian Girl. This changed his life and now he goes around the world speaking about life with Jesus and his pseudo rational approach to the gospel for a fee.

He emphasized his personal relationship with Jesus and does not value the Bible as you would think. A question and answer session followed his speech and I got a chance at the microphone and said “25,000 children starve to death everyday on average in the world. What good is it when you have a god that doesn’t answer to the dying innocents?”

Mr. McAllister did not understand my question or else he side stepped it and basically said he did not know why God would allow the evil of children starving to death. His son who was with him stood to add that such tragedies were a result of man’s own evil doing and the consequences of free will and evil being in the world. I didn’t ask a follow up question. Other topics that were addressed in the Q and A was “Why is god invisible” and “Is Mahatma Gandhi in heaven or hell.” An interesting quote that stood out for me was the speaker said “God is a dangerous kind of good”.

This was an all men’s group. The women of the church cooked the food, fixed our plates and brought it to us, but we had to get our own tea. I did detect a small, very small amount of reaching out for honest dialogue. I imagine this is coming from the hierarchy of the church who realize a great shift is taking place in Americatoward secularism and they must prepare their flock for exposure to the coming storm of reason.

There were very few young people at the meeting, which was encouraging. The 25 and under crowd don’t seem to be buying into the Christian myth. McAllister’s answer was life can’t really have full meaning unless a person finds Jesus and can plan on living in heaven for eternity. Nothing really new there, but it was fun. The food gets 3.5 stars. The preaching gets a 1/2 star and Q and A session gets 1.5 stars. There will be another meeting like this next year.

Clint Crain
This was kind of a shot in the dark for me. Going into the event, I had hopes of a more intimate gathering with a little more back and forth interaction. I know of the church, but really had no idea of the number of people that would be present. I did know that I was going to be in the minority as a religious skeptic.

After arriving, all hope for direct interaction was lost. The room was laid out in a manner that reminded me of a high school talent show. The crowd was made up of men and a small number of women working as coordinators. It wasn’t long after arriving that the dinner was brought out and the main speaker took to the stage. He began by talking about his childhood of being brought up in a “nonreligious” home in Irelandand by the age of twenty he became a faithful Christian.

Moving on chronologically, he began to speak about his journey to find reason in his life. At this point, he spoke about thinking of Islam and Judaism, but did not give a reason for his rejection of those ideologies. Pushing to find meaning and purpose became to central topic as he started a PowerPoint of biblical verses mostly from the Old Testament and philosophical quotation.

I found myself at this point looking for the answer to the title question as I interpreted it. What does it matter? This question was ‘what does faith matter’ in my mind, but he was alluding to what does life matter? Faith gave him purpose, but I keep asking why one needs that “purpose” to begin with. We all struggle with finding a self-identity, but to think that there must be some greater plot to abide by seems beyond me.

The Q and A was a high point. The question, “Why doesn’t God help the starving children throughout the world?” was quickly swatted with, “I don’t know why there is suffering.” My two questions were about the quality of the biblical God’s character. “How can a book that condones mass slaughter, slavery, and rape be seen as a book of guidance?” was answered with “God changed in the New Testament area.” Then, “If God is a jealous god (Deuteronomy 4:24) and jealousy is a sin (Galatians 5:20), then isn’t god a sinner?” was answered by “God’s jealousy is different.”

All and all it was a nice event.