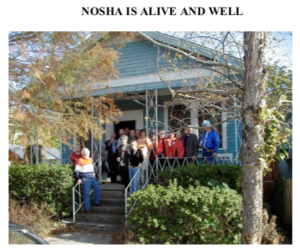 Writing in NOSHA News fifteen years ago this month, Connie Gordon Schultz marked  the occasion of the first meeting of the “revived and reconstituted” New Orleans Secular Humanist Association after the crushing devastation Hurricane Katrina bore on the city, and perhaps prophetically, but certainly welcomed, the reunification was just in time for the group’s  annual winter solstice celebration December 18, 2005. About 30 members, some of which are shown in the photo, attended and were living evidence that the mission of the group was worth keeping together in the face of its first significant setback. Back then, an email list and a few phone numbers were the only lifeline of connectivity. But it worked; people responded.

Today we face a different catastrophe as it involves speaking engagements, meetings, informal celebrations and Meetup events. The physical and logistical challenges of a major hurricane are dwarfed by those of thwarting a continuing pandemic that entails, as much as possible, people simply staying away from other people. Katrina kept the group apart for four months. COVID-19 has kept us in an activist’s version of solitary confinement for 9 months—and counting. Within the past few weeks, Bill Gates estimated that things may not return “to normal” for another 18 months, an approximation that is likely shared by others as a reasonable educated guess.

Can members of our current group find ways to interact  without physically gathering together for another 18 months, or even 12 months, or six? The Internet with its social media platforms such as Facebook and Meetup and its group conferencing capabilities  are tools that were in their very early beginnings in 2005 and had not yet been adopted by NOSHA, but today are its only sources of connectivity, so the metaphors of solitary confinement and isolation may not be completely accurate the way they might have been post-Katrina.

But is anything short of interpersonal engagement—handshakes, hugs, winks, nods, warm smiles and other human behaviors uninterpretable and not transmittable  through a camera and a pixelated screen—sufficient to keep interest high enough in members and followers to stay engaged and contributing to the group in the long run? Every social psychologist and culture theorist likely has an opinion on this, but in reality the jury is still out: there will need to be an end to the pandemic and enough time after that to assess the consequences. For one thing, we know many of our elder members are not connected to social media at all, and many of them are our most regular meeting attendees, and some will be lost through attrition; conversely, some of our most active followers on social media and Zoom conferences participate rarely, if ever, in in-person group activities. These folks would figure to be around when the smokes clears.

But depending on the active duration and danger of the disease, one should expect changes to  operations and agendas. Following Katrina, NOSHA went from having two meetings a month, one with a guest speaker, the other a group discussion led by one of the members, to one a month. That group changed meeting locations several times. Hopefully, our changes may be no more consequential than these, but right now we are only assured that there will be more questions than answers as the new year dawns.

The year’s-end pitch (you must be used to this by now!): Please do your little part in keeping NOSHA alive and well. Renew your membership or join. Shop Amazon? Include us on the transaction.