Where are today’s John F. Kennedys? 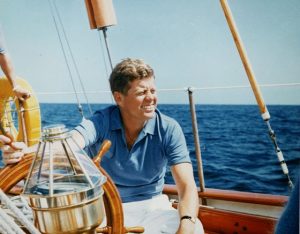 A couple of months ago, Harry Greenberger did a reading at our regular NOSHA meeting that posed the question of where are the Kennedy-esque politicians for our era? Which is a good question, considering how many legislators across the country seem to do very little contemplation of the serious issues we face and only offer knee-jerk, simplistic viewpoints and solutions to the problems of our day.

He suggested that our federal and state governments have deteriorated since the 1960’s, because we simply don’t have this caliber of political leader out there who will take an important and courageous stand in the face of intolerance. Greenberger was referring to an article by Al Menendez that got him to thinking about this from The Voice of Reason: The Journal for Americans for Religious Liberty (page 3, issue #3, 2013).

He pulled several key points from this article during his reading:

1. Kennedy emphasized the importance of separation of church and state as a key governing principle of the American ethos. In his Houston address to Protestant clergy in September 1960, he spoke these memorable words that still echo through history: “I believe in an America where the separation of church and state is absolute…an America where religious intolerance will someday end…This is the kind of America I believe in and this is the kind of America for which our forefathers died.”

2. The president thought public aid to church-related schools was unconstitutional, and he refused to include these schools in his federal aid to education proposals.

3. Kennedy opposed the opening of formal diplomatic relations with the Vatican, feeling that it would not be desirable for either party and would not advance good will between religions in the U.S.

5.  In his Houston address, he proclaimed, “Religious liberty is so indivisible that an act against one church is treated as an act against all.” He said, “I believe in an America that is officially neither Catholic, Protestant, nor Jewish…and where no religious body seeks to impose its will directly or indirectly upon the general populace or the public acts of its officials.”

These are just a few of the sentiments Greenberger shared of Kennedy’s impressive grasp of church-state separation. And this is a concept we should all consider at this time during a legislative session steeped in religiously motivated bills. It is a question that needs to be explored and promoted often: where are today’s John F. Kennedys? Maybe one of us will fill the void.