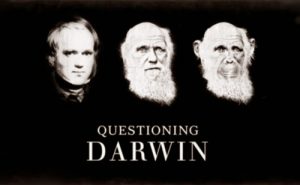 HBO’s recently aired documentary Questioning Darwin is 60 minutes of documentary trash. It ignores science completely, minimizes diversity within Christianity, distorts Charles Darwin’s personal struggle with faith and science, engages in agonizingly endless emotional appeals for religious faith, and perpetuates ridiculous myths about evolution and religion. The few moments of useful information scattered throughout the film fail to make up for its overwhelming volume of irrelevancy. If Questioning Darwin captures any significant aspect of the evolution-creation debate at all, it is only the perspective of the most ardently literal bible-believer, but even that perspective is described in only the most superficial terms.
One might expect that a documentary titled Questioning Darwin would at some point discuss scientific evidence for evolution. It doesn’t. There is a brief note that science understands the earth to be ancient, but not a single hint as to why. There’s a passing mention of evidence of change in animal forms, but no detailed discussion. There is no mention at all of many other lines of evidence, some of them critical to an understanding of the theory. There’s not a single word about the observable sorting of fossils into layers of age-related life-forms, no reference to the complete absence of out-of-sequence fossils, nor a whisper about test-tube-verifiable genetics. In terms of comprehending the science of evolution, Questioning Darwin is a complete failure.

The film’s presentation of Christian perspectives is only slightly more competent. Many Christian individuals and not a few denominations see no conflict between science and religion generally, nor between evolution and Genesis in particular. Many Christian believers are quite willing to take parts of the Bible as allegory, metaphor, or just plain folktales. Many understand that their scripture is not a primer on science or history, and don’t try to insit otherwise. But these Christians are nearly invisible in the film, which almost exclusively presents the views of biblical literalists. The viewer is left with the impression that Christianity per se insists the earth is 6,000 years old, there was a real global flood, and there were dinosaurs on Noah’s Ark.

Charles Darwin himself is portrayed as engaged in a lifelong struggle with religious faith. To be clear, Darwindid grow up in the Anglican Church, accepted basic Christian doctrine in his younger years, and even contemplated becoming a clergyman at one point. But the film understates Darwin’s lifelong commitment to systematic observation of biological facts, and the application of logic to evidence. Darwindid struggle with the implications of his theory, but was more concerned about what other people would make of it, and very little about the implications for his own spiritual life. His own certainty in the reality of evolution was solid, his religious faith left in tatters by years of scientific practice. The film fails to capture what Darwinknew even at an early age: that observation and logic lead to truth, and that any hypothesis, no matter how appealing, must be abandoned when comprehensive evidence goes against it.

Much of film was entirely irrelevant to any question about Darwinor Evolution. Long sections portrayed persons in difficult, even tragic, situations, who found solace in religion, could not imagine getting through life without divine assistance, believed in miracles, or simply could not believe they (or humanity) had arisen from simpler forms of life. It seems never to occur to the filmmaker that this crude appeal to emotion has nothing to do with evidence, or even with evolution. The undeniable facts that some people long for a god, hope for a miracle, imagine God helped them through a crisis, or believe that human beings have a divine dignity, do not constitute evidence of any external truth. Even if we accept, as some people in the film do, that evolution teaches people they are animals, and so leads them to behave like animals, that is not evidence against the theory. It’s not evidence of anything, as logic does not allow us to ignore selected facts merely because they disappoint us or make us uncomfortable. About half of the film was this kind of teary-eyed question-begging, none of which did anything to illuminate questions relating to evolution, or to the relationship between science and religion.

What the film does manage to leave the viewers with is a massive myth regularly employed by creationists: the notion that science and Christianity exist in some kind of binary opposition. Had the film bothered to present actual evidence either for or against evolution or Christian doctrine, the viewer might be able to evaluate that binary, but no such evidence was provided. More realistically, this particular binary opposition is an idiotic idea. The Theory of Evolution says absolutely nothing about souls, heaven, God, Jesus, or the Bible. If there is a conflict with religion, it is only that some believers choose to interpret their particular scripture as a science textbook. The key word there is “interpret.” For although the most ardent anti-evolutionists always claim they are taking the Bible “literally,” nothing could be further from the truth. There is no chapter or verse that plainly states the earth is 6,000 years old. Nowhere does it say that the six days of creation were each 24 hours long. Where is the page that says that Tyrannosaurs Rex, with sword-like teeth, were originally vegetarians? In what chapter does it actually say that the fossils we find today were laid down by Noah’s flood? Where are the verses that tell us that radiometric dating is unreliable because rates of radioactive decay have changed over time, or that the light of distant stars was created in transit? None of this can be found there. None of it is literal. All of it is an interpretation, and a very extended and convoluted interpretation at that.

Although the God-or-Darwin binary opposition is ridiculous on its face, it is an effective evangelistic tool. It really is the only tool that makes sense of the film. We may sympathize, perhaps even empathize, with the human suffering of the mother whose child is in a coma, or with the reformed prostitute or the drug addict in recovery. Obviously, that has nothing to say or to do with Darwin or Evolution. Or at least it ought not, unless we accept the God-or-Darwin opposition. If we do accept that binary, then maybe we could be moved to faith by the film’s emotional appeal, and having been moved to faith we would have to leave behind the only alternative, which is godless Darwinism. It’s black and white, either-or, one or the other. Questioning Darwin, then, was nothing more than a vehicle for the views of the least competent questioners of Darwin, those who know nothing of science, know nothing of scripture, and claim to be reading the Bible literally when they’re just making up stories.
~ By Jim Dugan