The Duty, the Irony: We’re All in the Same Boat in More Ways than One 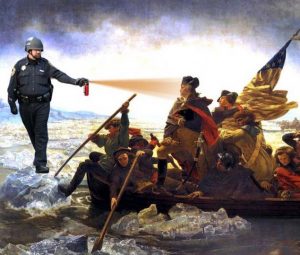 On November 7, 2016, most of us involved in the humanist end of secular, or non- or atheist activism, or to those with  just enough interest or curiosity about human rights issues, from race relations to sexual identity and much more,  probably started the day with a sense of a coming renewal of the confidence that went with recent legislation and court decisions, for the most part favorable, and a sense that the last bulwarks against an equal appreciation and respect for all groups were crumbling; and that our day had come, or least was within sight. The socially liberal Barack Obama was the aloof, “Just chill” enabler-in-chief. The President-in-the-wings, Hillary Clinton, was the heavy favorite to succeed him and continue steering the secular liberal Republic on the same course.


Then November 8th happened. A campaign of demagoguery played electoral vote of the many small rural states and population against the “blue wall” of the large coastal states and big city voters— and prevailed. The campaign that appealed to desperation, fear, false national pride, misogyny, hyper-masculinity, and racial and religious bigotry—parlayed with a widespread distrust of the opposition and her machine—was set to reverse the progress of the past few years—more likely decades, as it may well turn out. In the three weeks since the succession to power, the administration has been operating a manic machine of petty lies, vindictive personal insults, shameless attacks on the judicial branch, and daily degradations of the media—all the while signing executive orders as if they were the Make America Great Again ball caps at campaign rallies. Executive orders beginning with de-structuring AFA, cutting funding to organization providing abortions overseas, placing a hiring freeze the federal government, requiring two regulations struck for every new one added, approving the go-ahead of the Keystone pipeline, orders to review and recommend changes to Dodd-Frank financial regulations, ordering a report on military preparedness and threats from ISIS, and a ban on entry into the U. S. of travelers from seven predominately Muslim countries. The last has been the most contentious, though maybe not any more insidious than the rest, when all taken into account of one big, reactionary turn in policy ideology.

*** And the last one is perhaps the one secularists need most to concern themselves: are they themselves partially responsible for planting the seeds and tending the crop of  intolerance of Muslims? Do we share a responsibility as much as any Christo-fascist, or any rural church lady terrified by someone she has never even seen? It is true that radical Islamic factions have wreaked havoc across the world for the past 2 decades and has expressed a nihilistic evil in ways not seen before. These horrors have also served as easy-picking, low fruit for everyday atheists and  learned advocates of the supremacy the overriding jurisdiction of secular law alike; radicalized Muslims, almost single-handedly were a key to the rapid growth of the non-theist movement beginning in the mid-2000s. Also fueling what could easily be classified as “reaction” against religion during this growth period were fundamentalist and evangelical (American) Christians and Roman Catholic doctrine, though neither of the two (at the time) were involved in wholesale slaughter of non-combatant civilians. Theirs was (is) a more subtle meddling in public welfare (contraception bans by the Vatican), and ongoing attempts to hurdle the metaphorical wall of separation between church and state (opposing equal rights for non-traditional sexual relationships and identity) by fundamentalist Protestants. Perhaps ironically, the hew and cry by Christian fundamentalists against Islam in general after 9/11, with a cheerleading President Bush, together with the Islamic terror campaign, was a tipping point in deciding to get actively involved for yours truly. My conversion to non-belief had hibernated 30-odd years since college, but now I was d-o-n-e with these holy warriors—all of them. It was game on!

—————————————————
One of the original “Four Horsemen” of New Atheism, Sam Harris, and celebrity iconoclast and atheist Bill Maher are also known for anti-Muslim polemics and rhetoric over the past years. David Silverman, President of American Atheists, looks a little like a fundamentalist atheist (if there is such a thing). From his latest book Fighting God: An Atheist Manifesto for a Religious World, which he brought with him to a recent NOSHA talk, says

“I’m sometimes called Islamophobic. And while I do admit to fearing some major factions of Islam, I don’t like the connotation or the politically correct assertion that such fear is irrational. Concerns about Islam are very different from, for example, concerns about Judaism because Islam is unique among religions today in posing a real threat to the human condition. I would go so far as to say an educated fear is a completely rational position.

NOSHA has no official statement or adopted policy on the subject, but its most used and viewed media, Facebook, has been a continuously charged magnet for Muhammed memes, links to bad behavior by ISIS, and the shame of burkas and girl brides. It’s easy, it’s uncontroversial, it’s the echol chamber; and the material is easily found. We have all taken part. But I think now we have  seen where this could lead. A bigoted, racist, misogynistic, egomaniacal charlatan is the President. Harris and Maher, together in a very recent discussion realize we should rethink the wholesale condemnation of a religious group that restrict previously approved visas with even tougher regulations as the President called for. The latest issue of The Humanist (published by the American Humanist Association) has a topical essay subtitled “Humanism’s Role in Defending Human Rights and Civil Liberties.” And it seems from conversations and participation in the Women’s March and social media posts that most of those in our group are rightfully shocked that authoritarian attempts to restrict travel for religious reasons was proposed. If, for no other reason, all members of the non-theistic community would do well to practice an exercise in self-preservation and join in opposition to the bigotry against Muslims, as misdirected as we might find the religion of Islam itself. Those this should go without saying, we all have allowed our emotions to focus on the group and the individual rather than the ideal. But the current administration’s agenda is underwritten and becoming staffed with ideas and officials that could qualify as Christian fascists, and if there is a non-religious group about religion more reviled than religious Muslims and Jews, it is freethinkers, humanists, and atheists.

“From even the greatest of horrors irony is seldom absent.” H. P. Lovecraft