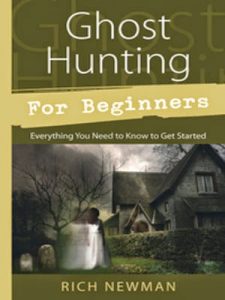 I’ve been interested for some time in the “ghost” industry in America, from books of ghost stories to New Orleans ghost tours to endless ghost hunting programs on television. One of details that make this social phenomenon so fascinating is its nearly total lack of explanatory theory. Exactly what do aficionados think a ghost really is? What evidence do they have? How do they test their hypotheses?  I’ve been looking for a good book that attempts to explain some of the models in a more technical sort of way, but so far, without success.

I recently checked out a copy of Rich Newman’s Ghost Hunting for Beginners.  I picked this particular book because it claimed to take a more systematic approach, recommending that “the best way to investigate the paranormal is with proven, scientific methods.” I read the whole thing, and learned sadly little.

The problem with this book, as with most materials on ghosts and ghost hunting, is “energy.” “Energy” is a perfectly legitimate word with a certain scientific cachet. But when used with frustrating vagueness, with no respect to differences between types or how they’re stored or converted or transmitted, “energy” is one of those red-flag words signaling flimflam.

Because of its vague usage of the term “energy,” the book doesn’t even raise, let alone answer, the questions any technically minded person would naturally ask.Ghosts, the author tells us, are made up of electromagnetic energy. But if so, why are ghosts so hard for us to detect, given that we have reliable instruments capable of measuring all kinds of electromagnetic fields? We are told that ghosts sometimes set off EMF (electromagnetic field) detectors. But how does an observer distinguish between a ghostly EMF and a natural EMF or one generated by electronic equipment? Ghosts need electromagnetic energy to manifest physically. If so, why are the areas around power plants and substations not infested with ghostly phenomena? Ghosts sometimes drain batteries. But how does a ghost convert the chemical energy inside of a battery into electrical or electromagnetic energy? Ghosts sometimes leave EVP (electronic voice phenomena) on audio recorders. Well then, do they do that by creating a complex set of pressure waves in the air to be picked up by the microphone, or by generating analog electromagnetic signals that are picked up inside of the electronics of the recorder, or by generating digital electromagnetic pulses directly into the recorder’s memory?
Let me be clear: I think Ghost Hunting for Beginners is one of the better books in its genre. Many are far worse, bristling with the technical-sounding weasel-words that so often mark pseudo-scientific sloppy-headedness. They use terms like vibration, quantum, higher dimensions, anomaly, vortex, and others, with such looseness as to render them all meaningless.
Numerous other problems of a technical nature beset the book and the ghost business in general. These would be less relevant if ghost hunters and other adherents claimed that ghosts were beings of “spirit,” entirely bereft of any physicality. But this claim is rare, since ghosts that can’t interact with us are boring. If we can be aware of ghosts, than either the being of a ghost or the manifestation of a ghost must contain elements that exist in our material universe. The fact that the methods and models for understanding those material elements remain vague and under-theorized after decades of “paranormal investigation” convincingly tells us that the whole business belongs in the same category as Bigfoot and the Loch Ness Monster.
~ Review by Jim Dugan, NOSHA Board Vice-President
Ghost Hunting for Beginners: Everything You Need to Know to Get Started, by Rich Newman. Llewellyn Publications (2011).