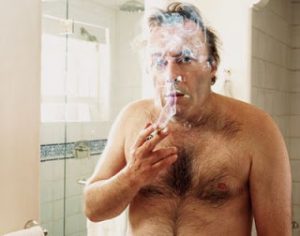 Amid curls of smoke, Christopher Hitchens and
his famous matte of fur from his Vanity Fair days.

“Isn’t that so sad,” I said more as a declaration than expecting someone to agree.

“Well, not really. I mean, it was expected,” said my always witty friend, so matter-of-factly. “It would have been sad if it wasn’t, don’t you think?”

I had to admit, my friend was right and his perspective made me pause to think more about the heartache that was palpable on the web. It would have been stupefying if he had passed away suddenly and without warning. But we had warning and the man I was lamenting had brought us along with him during his final year and a half with his usual critical brilliance and unwavering nerve.

The man I’m referring to, of course, is Christopher Hitchens who died in December. And his death, while talked about openly by Hitchens himself, nevertheless made many of us entreat (dare I say pray) that death would spare him for as long as possible.

One night a week or so after his died, I found myself wide awake and fitfully dozing and drifting as is often the case when dawn is close. After rolling through my standard litany of minor worries (that always seem worse in the dark and cold), I found myself thinking about Hitchens and was astonished at how quickly my eyes were welling up. After a few minutes, my cheeks were wet and I whispered to myself, “…just what brought that on?”

I was genuinely sad and mystified because it seemed embarrassing on some level. I didn’t know the man and, while I followed his progress since he announced his illness, I had assumed he would be here for several more years yet. We lost a couple of his books to the Katrina floods, so maybe it was my sentimentality getting the best of me. But when I saw the video of him at an atheist convention in Texas in October, the limitation of a cure and the cancer’s persistence had made it impossible to pretend that he could have gone on much longer, much less beaten it. He was a mere slip of himself, but the thrill he could still evoke in the crowd was manifest. I wish I’d been in that crowd.

When these same tears occurred again a few weeks ago during another sleepless night, I realized that maybe I should write my own version of a tribute, since all secular websites worth anything have posted something about this lost horseman of non-belief. I can start by saying that, while his death wasn’t unexpected, the finality is what gripped me and made me mourn openly someone I have never met.

A fond memory of Hitchens that makes me smile every time is his strange and glorious observation that appeared in one of his early columns for Vanity Fair in September 2010 when he candidly talked about his June diagnosis. “The Topic of Cancer” was a bold and fierce examination of cancer and, while I could never hope to pull off such vulnerability and acute descriptions with as much defiance, Hitchens made it a cerebral partnership for us all.

His comments on the side effects of chemotherapy: “Or for the way that my newly smooth upper lip would begin to look as if it had undergone electrolysis, causing me to look a bit too much like somebody’s maiden auntie. (The chest hair that was once the toast of two continents hasn’t yet wilted, but so much of it was shaved off for various hospital incisions that it’s a rather patchy affair.)”

Chest hair! I have no doubt that it was enjoyed by many admirers on two continents (maybe more). My brother said while he was dealing with prostate cancer, which uses estrogen therapies to combat its progression, mentioned that he also noticed the loss of body hair and he joked heartily at how smooth it made his skin. Humbling to the core, it’s refreshing that Hitchens could remind us how damning and precious those memories are.

Another interesting tidbit is my own “one degree” of separation. A colleague I used to work with at a weekly publication (and to whom I was once tethered during one of those arduous team building adventure/climbing courses) wrote about having drinks and conversation with Hitchens one on one. “J.” was at an industry convention and won a category in which his writing had been judged by none other than Hitchens himself. He was also a featured speaker that day and while J. had tried to edge close enough to speak with him afterwards, the adoring onlookers made it impossible.

In what may be one of the most spectacular feats of daring that I’d like to think I would have done if I’d been in his shoes, J. decided to call Hitchens at his home to request a few moments to express his appreciation. That Hitchens’ home phone number was listed in a Washington, D.C. phone directory is like something out of a Hollywood script, don’t you think?

To his astonishment, Hitchens returned the call and suggested that J. come on over. Let me repeat that slowly. A personal invitation to Hitchens’ house! What a splendid memory to have. (Things like this make me consider that even as a non-believer, if this had happened to me, I just might start believing there was a God after all.) It seems Hitchens was every bit the over-the-top drinker and intellectual that we’ve been led to believe. And J. was there to soak up every minute that he could. It was truly momentous that Hitchens could still entertain mortals; it’s possible that one day, J. may return the favor to an unsuspecting writer himself.

When my father was dying of lung cancer, I remember my brothers and I discussed that a parent’s death, at whatever age you are when it happens, makes you very aware that you are next. It might not happen for another 50 years, but you are mortal and here’s the proof. One thought that kept popping into my head was that Hitchens’ was one of us and now he is gone. He was an unlikely guardian for those of us who enjoyed and needed to hear his thoughts on being an atheist. In spite of the criticisms that he probably deserved, he made us proud to call him on of the tribe. And he slipped away, but not before he moved us with his humanity and intelligence.

If you missed the final tribute in Vanity Fair by his long-time friend, Salman Rushdie, here it is. I think we all want to be loved by our good friends as much as Rushdie clearly did Hitchens.

I still wonder what provokes my tears for him even today. But I’m at an age where I wantonly hate that we’re all mortal. I like to think that Hitchens made our movement, if I can call it that, stronger and more invincible, just like the man himself.

“Tho’ much is taken, much abides; and though
We are not now that strength which in old days
Moved earth and heaven; that which we are, we are;”
~Ulysses, Alfred Lord Tennyson