This is the wa

This is the way the world ends

This is the way the world ends

Sometimes the magnitude of a crisis doesn’t register with you until something—something large, small, something normally insignificant or unavoidably substantial—presents itself to you with the abruptness and urgency of a boxing glove sailing your way; and philosopher Jean-Paul Sartre’s quotation “Hell is other people” takes on a whole another interpretation. 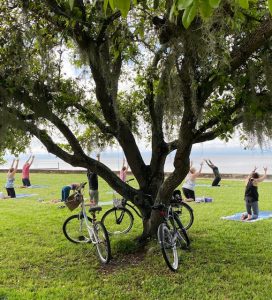 Yogis on the lakefront in Mandeville, La.

Yup, that thing bringing home for me the gravitas of the coronavirus pandemic was while poking around Amazon’s infinite webstore in search of a tool—and found that after ordered, it would be about five days before delivery of the item. This, even with an Amazon Prime membership (to the tune of almost $150 a year), which usually promises 1- or 2-day free delivery. It’s regrettable: it might be a hint of things to come, a thing, specifically, called The End.

Unfortunately, major social upheavals caused by epidemics or war are quick to be seized on as signifiers of an apocalypse shortly to follow. After that, life as we know it ceases to exist, thanks to end times prophecy of a major and dominant cultural framework of the West for 2000 years, the Christian religion.

And, unfortunately because social anxiety and personal panic invariably accompany thoughts of end times, and can lead to irrational and catastrophic results. Mathew Gross and Mel Gilles in their 2012 publication The Last Myth: What the Rise of Apocalyptic Thinking Tells Us About America tell us that in the course of human development, it wasn’t always like that. Simplifying it, to view human condition and life on Earth as having an endpoint is an idea that is relatively young in terms of going back to man’s earliest days. That endpoint is the return of Christ and the Rapture. For a much longer period and many more generations preceding the Christian domination, the prevailing overarching worldview of the human condition was one of birth, growth, death, and rebirth; and at the center of this cyclical nature was the belief that the cosmos was in a perfect state of balance between chaos and stasis. Had they had access to information to the rest of the human population across the planet, and information and understanding of catastrophic disease, famine, or warfare, the  attitude may have been WTF? This has been going on forever! That’s why we have kids.

The Christian eschatology has piggy-backed on the more secular understanding that we have these days. We can name the diseases and epidemics like HIV, SARS, Ebola; and we can use mythological dates and millenia to attach all kinds of “That’s All Folks!” exclamation points to the story (remember Y2K) , so even giving up the belief in—or at least  adhering less strictly to—the Christian faith, the cultural mores and cognitive wiring of The End in the post-modern society and individuals is persistent.

The end of the current pandemic is not known—unknowable, in fact. Global turmoil, economic depression, collapsed health infrastructure, martial or fascistic law implementation, border conflicts, and yes, even the nuclear option, all of which are imaginable, and all are  low probabilities individually, but. . . .

As rational and civic-minded creatures, we know lessening the misery index of this event is dependent on following the guidelines of the healthcare specialists, and enacted by civil statute, local and national. Social distancing has been coined and is the rule of the day, though at least one psychologist thinks it be renamed physical distancing, to emphasize the need, now more than ever, of bonding in virtual social networks as needed to begin to organize a society that will be better prepared for cataclysmic disruptions. Private-owned healthcare systems are great here in the U.S., but they do not overbuild for just-in-case’s sake—no money in it. Neoconservative national governments do not build to large capacity because of a limited tax base. Child care and in-home nursing are out of the budget for the same reason.

That’s plenty to work toward, as the past weeks have shown. Keeping your voice amplified in unison with others is the key, and physical distancing must never become social disengagement. Stick with NOSHA through these times and amplify your secular voice: the end is ΝΟΤ nigh, and though times are tough, they won’t be ending any time soon. And besides, Amazon Prime shipping is still free, if not quite as fast.