Since the recent retirement of the production manager at the Humanist Advocate, (NOSHA’s quarterly newsletter) the editors will use this blog to report on the recent goings-on with our group—official events or impromptu get-togethers, or co-participation with other groups’ events. Many thanks to John Simon for putting up with Charlotte and me for nearly two years, and good luck to him and his career. If anyone has the experience and software tools to design and publish to the web a four-page newsletter letter every three months, please contact either of us about a chance to sharpen your skills and burnish your image as a dedicated freethinking volunteer! 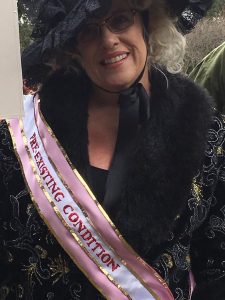 For the past several years, February has been set aside for a celebration of Charles Darwin’s birthday, February 12. Since February is usually the month Mardi Gras falls, the celebration, in the form of an educational forum of several speakers covering evolution and other related science topics, has been a good fit for the end of the holiday season and getting the new year jumpstarted.

Except this year. This year, every humanist, every social liberal, and every science advocate and human rights champion came face-to-face with a sense of dread not many had experienced before, caused the election of a United States President with one of the most unworthy agendas of nationalist hubris, racial and religious exclusion, and climate and environmental disregard not seen since the days when the world was going nuts with fascism The board of directors for NOSHA decided to take the month of the inauguration as an appropriate time for mourning and reflection, scheduling only an informal group discussion, since several others in management had chosen to join forces with nation-(world-)wide Women’s March scheduled Saturday, January 21, the day following the official Inauguration Day in Washington, D.C. Beth Deitch led the discussion theme “Secular Humanism 2017: Where Do We Go from Here?”. Over thirty made their way to Loyola University to sit in and participate on the topic. Meanwhile, on the other side of town— 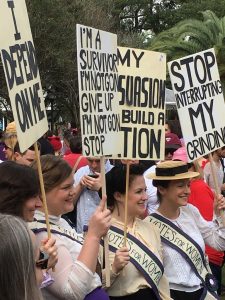 …and the other suffragettes

From Washington Square in the Marigny, NOSHA members Jennifer and Ricky Porter, Michelle Abeyta and I hung together for the march all the way across the French Quarter, through the CBD, and ending up at Duncan Plaza, where Charlotte Klasson was holding down the info table for NOW (National Organization for Women) alongside the pavilion. Joyce and Dave Thomas and Jim Dugan were also among the other verified Unholy Strollers, as well as Adam and Ariel Kay, who were met along the way; but NOSHA’s group remained mainly separated in the unanticipated large crowd of 10-15 thousand.

Charles Darwin’s traditional role as subject and centerpiece for our January event may have been postponed, but it was not forgotten. His memory was a fine excuse to enjoy a a pint or glass of wine, even though excuses for toasting are hardly required in New Orleans—much less at the run-up to Mardi Gras. After a few suggestions at an earlier planning meeting, a “social” at Monkey Hill Bar in Uptown, complete with a cake was set for Sunday, February 12. 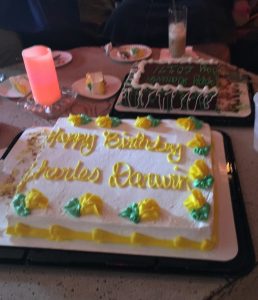 Photographer arrives one slice too late!

As watering holes go in the Crescent City, Monkey Hill was quite civilized—unusually comfortable, in fact, with over half of the area furnished with sofas and cocktail tables and overstuffed armchairs, and warm, ambient lighting accenting the hunter green walls—although the early Sunday afternoon time may have contributed some to the relaxed atmosphere.

A dozen or two members and supporters turned out, several from out of town, including Douglas and Yvette Parfait of Slidell, Jon Kennedy from down-da-bayou Cut Off, La., friend Chris from JPL, and a follower who made it all the way from Baton Rouge.

Tall tales and bad romance find a welcome home in public drinkeries. A story was overheard about Darwin’s misadventure into the Gulf of Mexico. Navigational errors, ill winds and ocean currents steered the helm and blew the sails of H.M.S. Beagle into the Gulf of Mexico and up the mouth of the Mississippi River, eventually to dock at the port of New Orleans. After several days of observing the native population, a sizable a percentage of which was considered the “property” of the rest, it was rumored that C.D. was on the verge of reformulating his theory after plugging in the data sets he gathered there. 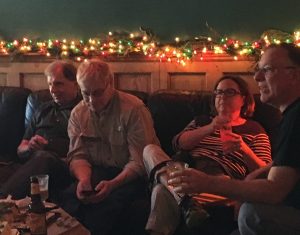 But all jokes aside, NOSHAns know he had it right from the beginning; but we still need to work around that Mardi Gras thing to get his birthday tribute on a more regular schedule.

See ya in a few…Marty Bankson