Max Ciolino with No Waste NOLA

The ubiquitous plastic grocery bag, with high tensile strength disguised in its tissue paper sheer, along with water bottles and coated aluminum cans, is deservedly near the bullseye of environmentalists’ target for elimination. New Orleanians go through 225 such bags PER DAY, which comes to nearly 2.5 billion in a typical year. No Waste NOLA was a part of the larger coalition Louisiana Reusable Bag Alliance supporting a city ordinance which would have placed a ten-cent fee on non-recyclable plastic bags. The ordinance was withdrawn in September 2016 by councilwomen Guidry and Cantrell, who introduced it, as it appeared to have little support. There is a well-funded lobby opposing placing fees or reducing consumption of non-recyclables. The reasoning is that such restrictions would be “job killers,” but the underlying agenda is corporate profit. State legislator Paul Hollis attempted to introduce a bill in the state house earlier that year which would have prohibited New Orleans from imposing fees on their use, which probably also was a clue to the opposition in conservative, pro-business Louisiana and the councilwomen’s decision to withdraw it.

From the Texas-size Great Pacific Garbage Patch (formally know as the North Pacific subtropical gyre) where water bottles, styrofoam cups, and wrappers float, trapped in an spinning cesspool of “single use” packages, to the invisible chemical reaction to human hormonal systems from bisphenol-a (BPA) and pthalates on newborns, to the image of the dead albatross in the Midway atoll, its partially decomposed body revealing plastic bottle caps and disposable lighters it had ingested, we have a constant reminder that “jobs” will be irrelevant on a dead planet.
***

The month of March brought NOSHA  members and supporters back to their meeting home base, the East Bank Regional Jefferson Parish Library, for the first time since November of last year. The annual Winter Solstice party during the holiday season and the unsettling changes in the national political  outlook in January, along with renovations to our meeting space and the usual Mardi Gras break,  all contributed to our three month absence from the venue.

For our first full meeting of the year, Max Ciolino, a local attorney and president of the advocacy group No Waste NOLA introduced the screening of the 2010 documentary film Bag It! Is Your Life Too Plastic? and followed the hour-long film with an open discussion about the scope of the local plastic pollution problem and his group’s efforts to reduce it by working through city and local  governments. 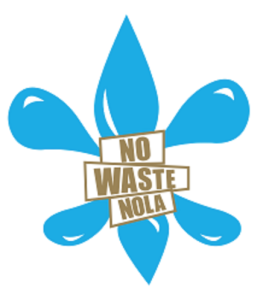 Usually arguments against “job-killing regulations” favoring a cleaner environment are never balanced (in their makers’ minds) against cases of animal and human life preservation without them. The accumulating disaster of the petrochemical products that we throw away is in plain sight—maybe not in your backyard, but somewhere else on the planet—because there is no “away”, toward which shit can be thrown, other than another part of the planet. Degraded organics may fall apart and end up being ground into topsoils or sinking to ocean floors, but there they enter fresh water supplies and food chains. In Bag It!, film director Susan Beraza balanced the apparent apocalyptic consequences of a throw-away consumer culture left unchanged with a light-hearted—at times, almost comedic—role of the documentary’s protagonist Jeb Berrier, who is on a mission to do his part by eliminating these plastics from his life (and others, as well) showing the process of his awakening and education about the problem. Jeb and partner were expecting the birth of their first child in the narrative, which made for a clever allegory of the life-death-rebirth cyclical mythos of the ancients. His easy going portrayal did not, however, marginalize the enormity of the problem.